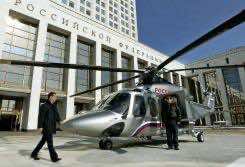 Russian Prime Minister Dmitry Medvedev has switched to using a helicopter rather than a car for his trip to work from his suburban residence and other travel around Moscow, his spokeswoman said Wednesday.

The move appears to be a bid by the premier, who lives in his suburban Gorki residence west of Moscow, to placate irate drivers who are forced into massive traffic every time his long motorcade swings by.

“He will always do this (take the helicopter) whenever the weather allows,” his spokeswoman Natalya Timakova told AFP.

The government Wednesday published pictures of the helicopter landing right outside the massive White House government headquarters in central Moscow which under the USSR housed the Soviet parliament.

A helicopter pad has been constructed that allows Medvedev to land directly outside the building.

The government has not made clear what brand the helicopter is but the registration number RA-01982 indicates it is an AW-139 manufactured by the Italian firm AugustaWestland.

AugustaWestland is wholly owned by the Italian industrial conglomerate Finmeccanica in which the Italian state has a partial share.

Medvedev, a keen photographer, has already taken advantage of the trips to post photos on his Facebook page of a snow-covered Moscow from above.

“When spring will come I do not know,” he commented on one of the pictures. One user quipped back “It’s being delivered by the Russian Post,” referring to the country’s notoriously slow postal service.