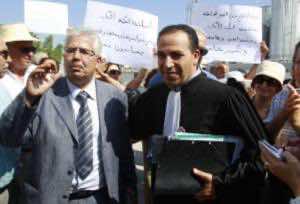 The verdict in the trial of a Tunisian university dean accused of violence towards a veiled female student was delayed on Thursday, as hundreds of people protested outside the court.

The new date was set for April 4, according to the court in the La Manouba suburb of Tunis, where a large crowd gathered to support the defendant, Habib Kazdoghli, who is dean of the humanities faculty at Manouba University.

Kazdoghli faces a possible five-year jail term if convicted of “violence committed by a public employee while performing his duties,” in a controversial trial that has gripped Tunisia for months amid bristling tensions between secularists and Islamists.

The trial has been repeatedly adjourned since last summer.

The case relates to an incident in March 2012, when the accused says two female students wearing the full face veil, or niqab, ransacked his office, charges on which they are being tried concurrently.

One of the women, who had been barred from the faculty for wearing the niqab in the classroom, accused Kazdoghli of slapping her, charges he denies.

Speaking outside the court, Kazdoghli told AFP the latest delay was the result of a strike by Tunisian magistrates.