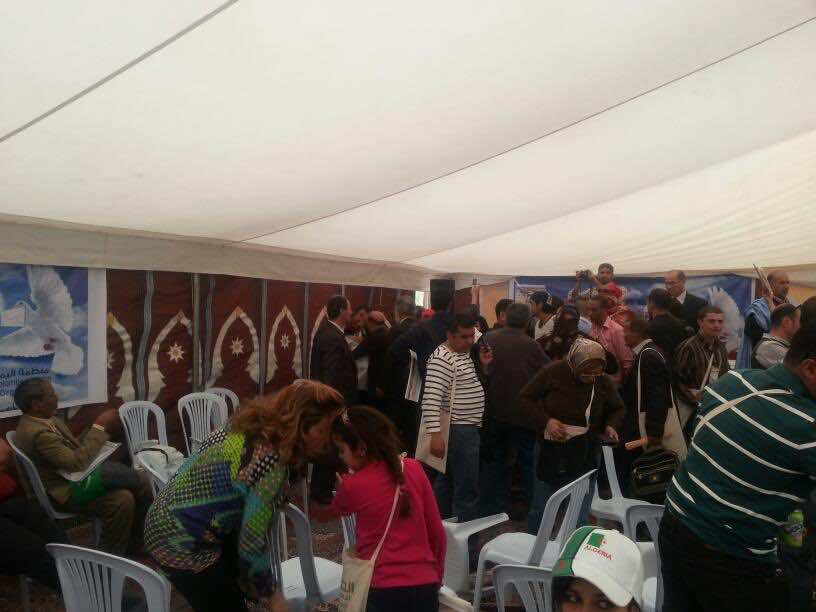 Once again, the Polisario has proved determined to uphold its abrasive repudiation of any initiative seeking to uncover the truth about its inhuman activities. This time, the targeted initiative was the Tunisian World Social Forum (WSF FSM Tunis 2013), which sought, on its second day, to discuss the situation of Moroccan detainees in Polisario Prisons.

According to Rowaida Mroue, a journalist who attended the symposium, Moroccan civil society representatives could not successfully participate in the International social forum held in Tunis, as intruders representing Algeria and Polisario disrupted the open discussion, which was taking place in a Moroccan tent at the campus of Tunisian University Al Manar.

The discussion was meant to expose the lamentable conditions lived by the Sahrawi Moroccans detained in Tindouf camps, in South of Algeria. In the presence of 120 of participants in the forum, representing a plethora of nationalities, 50 individuals stormed into the Moroccan tent, holding flags of Algeria and of the so-called Sahrawi Republic.

The intruders purposefully barged in while all attendees were listening attentively and concernedly to the testimonies of former Moroccan prisoners, some of whom from Sahrawi regions, in Polisario prisons. Some of those former Moroccan detainees, namely Ali Osman, Aldahi Acai and Abdullah Alemrana, were sharing the deplorable conditions they experienced and the inhuman treatments they were subjected to throughout their period of detention in the prison Rabouni in the Tindouf camps. For some of them, the lamentable reality lasted for more than 20 years.

At first, the intruders pretended to seek dialogue with the Moroccan side in a bid to answer what they perceived as allegations towards Algeria and Polisario and their responsibility for what Sahrawi people are undergoing in Tindouf camps. However, their true intentions rapidly unfolded as they attempted to derail the meeting and disrupt the testimonies of Moroccan activists and former detainees in Polisario prisons, which were corroborated by means of accurate documents and photos, displaying the misery the experienced in the Tindouf camps.

To avoid falling into the intruders’ trap of provocation, Moroccan activists resorted to members of the organizing committee of the event, who intervened to chase Algerian and Polisiario representatives out and eventually end the meeting at its very last phase.

According to Yassin Belkacem, head of a network of Moroccan associations in Italy, and one of the supervisors of the meeting, Moroccan activists will stage a protest before the organizers of this international social initiative to avert the recurrence of “such provocative acts from the opponent of the territorial integrity of Morocco.”

Belkacem went on to say that “these intruders are afraid of having their truth disclosed before the public opinion, for they want to keep the truth about the lamentable reality in Tindouf camps concealed.”

Polisario seems determined, by any means, to silence any voices digging out the inhumanity of its essence. However, Moroccans are more determined to debunk the deplorable nature of Polisario and its proponents and stand high against any opponent to its territorial integrity and to the Moroccan sovereignty of a Sahara that both history and its people are supporting.