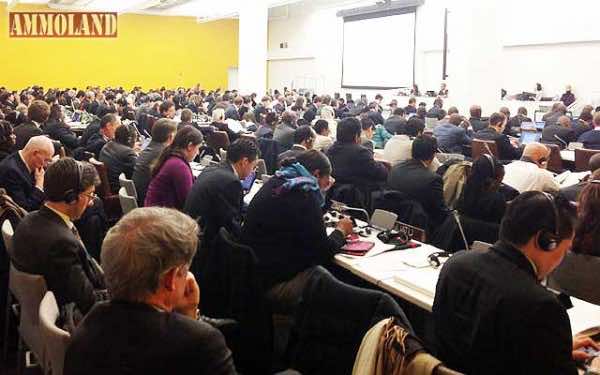 Iran, North Korea and Syria on Thursday held up agreement on the first global treaty on the $80 billion a year conventional arms trade.

The three states twice blocked moves to adopt a treaty by consensus at the end of 10 days of arduous talks at the UN headquarters.

A coalition of countries from around the world said they would now take the treaty straight to the 193-member UN General Assembly next week for approval. It can be passed with a two thirds majority which is virtually assured.

The move by Iran, North Korea and Syria, all facing sanctions or international reprimands for their weapons programs or trading, caused widespread anger at the conference.

“This is not a failure, today is success deferred and deferred by not very long,” said Britain’s chief negotiator Jo Adamson.

“A good strong treaty has been blocked by the DPRK (North Korea), the Islamic Republic of Iran and Syria but most people in the world want regulation and those are the voices that need to be heard,” she added.

All of the major arms producer — the United States, Russia, Germany, France, China and Britain — were ready to agree the treaty for which negotiations started in 2006.

It would aim to force countries to set up national controls on arms exports. They would also have to assess whether a weapon could be used for genocide, war crimes or by terrorists or organized crime gangs before it is sold.

Conference president Peter Woolcott of Australia had been about to bring the gavel down on an accord when Iranian, North Korean and Syrian ambassadors raised objections. After an hour of closed talks, a second attempt brought the same result.

“The inherent right of states to self-defense, to defend against aggression and preserve its territorial integrity is not addressed,” Iran’s UN Ambassador Mohammad Khazaee told the conference.

North Korea’s deputy UN ambassador Ri Tong-Il called the proposed treaty a “risky draft which can be politically manipulated by major arms exporters.” The envoy railed against arms embargos such as one his country faces over its nuclear weapons tests.

Syria’s UN ambassador Bashar Jaafari said the treaty should be more explicit on supplying arms to “terrorists” and “non-state groups.”

Dozens of countries made it clear to the three that they were isolated. UN leader Ban Ki-Moon was “deeply disappointed” that the treaty was not agreed, said a UN spokeswoman.

The United States is the world’s biggest arms dealer but Assistant US Secretary of State for International Security Tom Countryman said the United States backed the text and US trade would not be “unduly hindered” by the treaty.

Even if the treaty is now agreed in the General Assembly, it may not get universal acceptance.

Countryman predicted that other countries would join the objectors in voting against the treaty at the General Assembly.

But he added: “We think an overwhelming majority of states will vote in favor. I am happy to vote the opposite direction of such states as Iran, North Korea and syria on this text.”

Russia said there are “omissions” in the treaty and “doubtful” provisions such as the failure to control arms transfers to non-state groups. Russia is particularly worried about weapons getting into the hands of Chechen rebels.

A Russian diplomat told the conference “we will be studying the draft extremely carefully” before deciding whether to sign it.

India also cast doubt on whether it would sign the treaty.