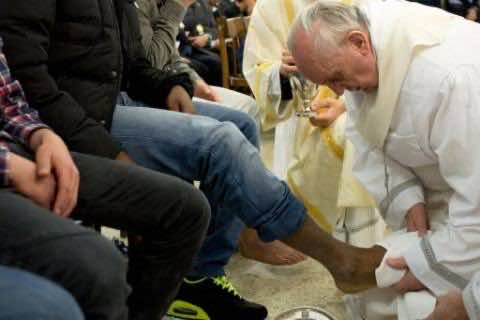 Pope Francis was to preside over his first Good Friday after washing the feet of 12 young prisoners, updating an ancient Easter ritual as part of his efforts to bring the Catholic Church closer to the needy.

The new pontiff is due to recite the Passion of Christ — the story of the last hours of Jesus’s life — in St Peter’s Basilica on Friday, before leading the Via Crucis (Way of the Cross) ceremony by the Colosseum, where thousands of Christians are believed to have been killed in Roman times.

Francis, whose first days as pope have set a markedly different tone from his predecessor Benedict XVI, is expected to take part in the procession and even carry the wooden cross on his shoulder part of the way.

Last year a frail Benedict, now 85, oversaw celebrations from under a canopy next to the Colosseum.

The new pope also held an unprecedented ceremony to mark Holy Thursday, washing and kissing inmates’ feet at a prison in Rome — the first time a pontiff had performed the ritual in a prison, and the first time it included women and Muslims.

“Whoever is the most high up must be at the service of others,” said Francis, 76, at the mass in the Casal del Marmo youth prison, a fortnight after being elected Latin America’s first pope.

“I do this with all my heart because it is my duty as a priest, as a bishop. I have to be at your service.”

Vatican spokesman Federico Lombardi said many of the participants broke down in tears at the ceremony, which was open only to Vatican media.

Video footage from the ceremony showed the pope pouring water over the feet — one of them with tattoos — bending down to kiss them and looking each of the 12 prisoners in the eye before moving on.

Lombardi said that while this was the first time a pope had washed women’s feet, Francis had performed this type of ceremony in his native Argentina many times before becoming pope, including in jails, hospitals and old people’s homes.

The Holy Thursday ceremony is usually held in a basilica in the city centre and commemorates the gesture of humility believed to have been performed by Jesus Christ for his 12 disciples at their last meal.

Popes performing the ritual have usually washed the feet of priests.

Francis has already broken with several Vatican traditions with his informal style, although he is yet to begin tackling the many problems assailing the Roman Catholic Church including reform of the scandal-ridden Vatican bureaucracy and bank.

The former archbishop of Buenos Aires, Jorge Mario Bergoglio, was known in Argentina for his strong social advocacy during his homeland’s devastating economic crisis, his own humble lifestyle and his outreach in poor neighbourhoods.

Good Friday is the second of four intensive days in the Christian calendar culminating in Easter Sunday, which commemorates Christ’s resurrection.

On Saturday, the pontiff will take part in an evening Easter vigil in St Peter’s Basilica. The Vatican has not yet said whether he will follow the tradition of baptising eight adult converts to the Catholic Church during the service.

On Sunday the Vatican’s first non-European pope in nearly 1,300 years will celebrate Easter mass in front of tens of thousands of pilgrims in St Peter’s Square and then pronounce the traditional “Urbi et Orbi” blessing to Rome and the world.