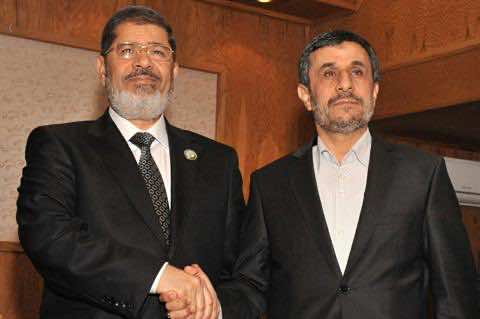 The Air Memphis plane, chartered by Egyptian businessman Ramy Lakah, is the first direct flight between the capitals since the two countries severed ties after Iran’s 1979 Islamic revolution.

The flight, which was carrying the Iranian charge d’affaires and his family to Tehran, will then fly back to Egypt’s southern city of Aswan, airport officials said.

Egyptian officials said recently that scheduled charter flights between Iran and Egypt would be announced soon, but no date has yet been set.

Civil Aviation Minister Wael El-Maadawy had said the flights would link the historic cities of Luxor, Aswan, and Abu Simbel in southern Egypt with the Islamic republic.

Iran has been reaching out to Egypt since Islamists came to power in the wake of the 2011 revolution that ousted veteran president Hosni Mubarak, a staunch critic of Tehran.

Earlier this month, Egypt and Iran signed a memorandum of understanding to promote tourism between the two countries.

Mahmoud Ahmadinejad, the first Iranian president to visit Cairo in more than 30 years, was given a red-carpet welcome by Islamist President Mohamed Morsi when he arrived in February.

Morsi, who hails from the powerful Sunni Muslim Brotherhood, has attended a Non-Aligned Summit in Iran, becoming the first Egyptian president to travel to Tehran since the Islamic revolution.