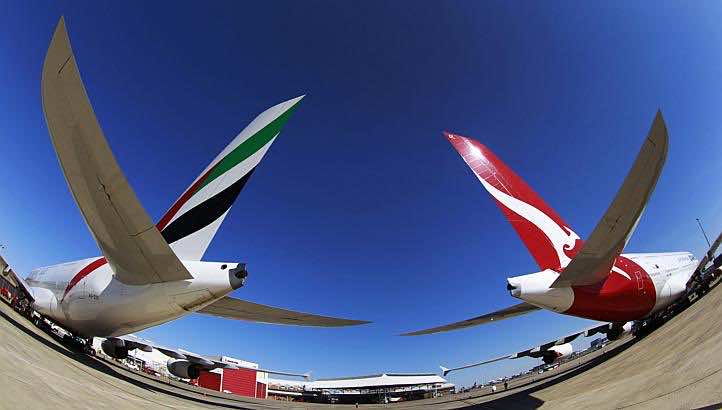 Two Airbus A380s will fly in formation over Sydney’s world-famous Harbour Bridge on Sunday to celebrate the launch of a tie-up between Emirates and Qantas, the Australian airline said.

The super-jumbos — one from each of the carriers — will coast up the harbour, passing the Sydney Opera House and city centre before flying in tandem over the bridge at 10.30am, Qantas said Saturday.

“This is believed to be the first time anywhere in the world where two commercial airline A380s have flown in formation,” it said.

“It is also believed to be the first time that two separate airlines have flown together in formation.”

The pilots have been training in simulators for months in preparation for the spectacular flyover, which will be done at 1500 feet (450 metres).

Permission for the unprecedented manoeuvre had to be sought from safety regulators in both Australia and the United Arab Emirates.

Australia’s competition regulator formally approved the Qantas-Emirates tie-up this week, allowing them to combine operations for an initial period of five years.

They will coordinate ticket prices and flight schedules and struggling Qantas will shift its hub for European flights from Singapore to Emirates’ Dubai base, ending a decades-long partnership with British Airways on the London route.