New York - For the third year in a row, a Southern California non-profit will host American parents and their children adopted from Morocco for a festival and workshop that celebrates their heritage.

New York – For the third year in a row, a Southern California non-profit will host American parents and their children adopted from Morocco for a festival and workshop that celebrates their heritage.

This year’s event, which annually features a parade of Moroccan children arriving in a carriage, comes seven months after the North African country stopped international adoption, depriving thousands of children whose prospects at educational or economic opportunities are now slim. Some babies, abandoned on the streets, die before they even get to the orphanages.

Several hundred parents, children and supporters of adoption are expected on April 20 for a gathering at the Costa Mesa Community Center that includes a workshop on adoption aimed at the Muslim community. The event is sponsored by Hawthorne, California based New Star Family Center, a community-based non-profit that focuses on Muslim immigrant groups.

“We want to engrave the Moroccan culture and the love of Morocco in the heart of the children and their families,” said Wafa Bennani, adoption program coordinator of New Star. “We want to correct the myths and misconception in the Muslim community.”

In September 2012, the Moroccan Justice Minister instructed prosecutors to oppose any petitions by foreigners seeking to adopt children from Moroccan orphanages, effectively halting international adoptions. Morocco had granted guardianship, called a kafala under Islamic law. Once granted guardianship, parents then had to adopt formally in their home country.

U.S. State Department now advises American citizens in the process of applying for guardianship to contact its Office of Children’s Issues. That office will reach out directly to families as information is available, according to the Bureau of Consular Affairs.

At issue is Morocco’s ability to ensure that children are raised Muslim. Only Muslim couples or single women had been allowed to adopt from Morocco, making it one of the few Islamic countries that authorized international adoptions. Morocco is not a party to the Hague Convention.

Advocacy groups monitoring the situation estimate that every year 6,000 children in the Moroccan kingdom are abandoned. Some are left on the streets and die. Others fill the cash-strapped orphanages that try to provide for them through donations, mostly from foreigners.

Since September 2012 when adoptions closed, the number of children in the orphanages almost doubled,. “Not many Moroccan citizens adopt, especially not the boys, and statistics shows that 80 percent of children raised in orphanages end up in the street and 10 percent commit suicide,” Benanni said.

Orphaned children in Morocco have limited access to higher education or jobs. Many end up on the streets after they reach adulthood and no longer live in the orphanages.

New Star started to encourage people to adopt from Morocco in 2006 after Bennani, a nurse from Morocco who has lived in the United States for 22 years, returned from visiting an orphanage in Meknes that is run by the Foundation Rita Zniber. The orphanage occupies the top floor of a public hospital for children until they are 5. After that, the orphans, mostly boys, live in a dormitory residence.

“I was heart broken when the 2- to 3-year old were crowding around me and pulling my skirt calling me mommy and pleading for my affection,” said Bennani, a mother of two.

“At that moment I promised myself that I will find them mommy and daddy to give them all the love that they are thirsty for.  So I went to learn how adoption is done in Morocco and started encouraging couples to adopt from Morocco,” she added.

Ali and Uzma Husain, an American couple from Arizona, adopted their son last year from an orphanage in Meknes when he was 5-months-old.

“We are so enormously blessed with our little boy,” Ali Husain said. “Everyday there is something new he does that just warms the heart.  To see him discover new things, how his eyes light up, how he expresses happiness in his eyes and with the heartiest of laughs I could have never known a baby to be capable of, I’m reminded of Allah’s Greatness and of his blessings and generosity to us. “

Uzma Husain said she is indebted to the Moroccan government and to the people that she and her husband met while they were in the kingdom.

“The change you see in these children as they grow and develop is high and you only experience as a parent. God willing I hope and pray that all those children waiting in orphanages are soon united with the families that long for them,” she said.

Bennani hopes that the event on April 20 will help raise awareness about how children from Morocco are being raised in America by their loving Muslim parents. She plans to show videos submitted by families. It’s also a way for American parents, many who are not Moroccan, to make connections with the Moroccan community.  Moroccan government officials and U.S. state department representatives have been invited to attend. New Star is working to reopen adoptions between Morocco and the United States.

“We want to encourage the Muslim community to adopt and be proud of the honorable deed they are doing by adopting children that don’t have families,” she said. “We also are trying to create an opportunity for Moroccan officials to follow up on the children that have been adopted in the United States and move them to reform the system of kafala in Morocco.” 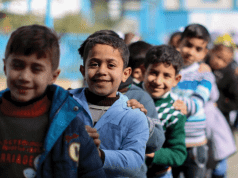