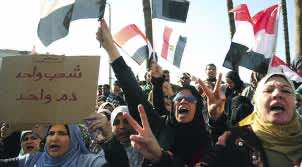 A strike by border guards on Sunday forced Egyptian authorities to shut down an airport in the Mediterranean port of
Alexandria and divert flights elsewhere, airport officials said.

The border police at the Borg El-Arab airport in Egypt’s second city were protesting against low salaries and demanding better working conditions, the officials said.

An airport employee told AFP that the guards sat on the runway, preventing regional flights from taking off or landing.

The interior ministry has been plagued by a wave of industrial action by police in recent weeks which boiled over earlier this month into an unprecedented nationwide strike.