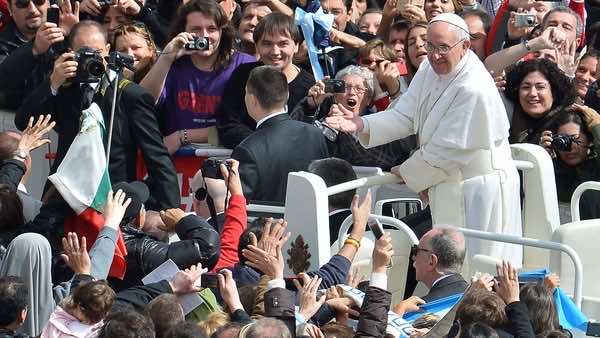 Pope Francis is making an Easter Sunday peace plea, praying for a “political solution” in Syria and saying the conflict has lasted too long between Israelis and Palestinians.

Speaking in front of some 250,000 people from around the world in the Vatican, Francis prayed for “dear Syria, for its people torn by conflict and for the many refugees who await help and comfort.

“How much blood has been shed! And how much suffering must there still be before a political solution to the crisis will be found?” he said.

Easter is the holiest day in the Christian calendar and celebrates the belief in Jesus Christ’s death and resurrection. It is the culmination of weeks of intense prayer for Christians.

At an Easter Vigil in St Peter’s Basilica on Saturday, the first pontiff from outside Europe in nearly 1,300 years of Church history reached out to non-believers and lapsed Catholics, urging them to “step forward” to God.

“He will receive you with open arms,” said the 76-year-old, formerly Buenos Aires archbishop Jorge Bergoglio, who has called for the Roman Catholic Church to be closer to ordinary people and the needy.

The Catholic Church is struggling in the face of rising secularism, particularly in Europe where attendances at Mass are falling sharply.

On Sunday, Francis prayed God’s message would reach “every house and every family, especially where the suffering is greatest, in hospitals, in prisons.”

“How many deserts, even today, do human beings need to cross! Above all, the desert within, when we have no love for God or neighbour,” he said.

On Holy Thursday, Francis celebrated an unprecedented Mass in a youth prison in Rome in which he washed the feet of 12 inmates including two girls and two Muslims — a ritual seen as a gesture of humility towards the 12 apostles attributed to Jesus.

Previous popes only ever performed the ritual with priests or Catholic laymen.

On Good Friday, Francis presided over a torch-lit ceremony at the Colosseum in Rome, where Christians are believed to have been martyred. There, he prayed for peace in the Middle East and urged dialogue with “our Muslim brothers”.

The new pope has said he wants a “poor Church for poor people” and has adopted a less formal style than that of his predecessor Benedict XVI, already breaking with several Vatican traditions in his first few weeks in office.

A moderate conservative on Catholic doctrine, he was known in Argentina for his humble lifestyle, his outreach in poor neighborhoods and his strong social advocacy during his homeland’s devastating economic crisis.

Vatican experts say he is yet to begin tackling key problems for the Church, however, including reform of the scandal-ridden Vatican bureaucracy.

Analysts are keeping a close eye on his appointments to top Vatican posts after Easter amid calls for a radical overhaul.

The status of the powerful Vatican bank, which is under investigation in Italy for money laundering but has made efforts in recent years to reform itself, is also a pressing issue.