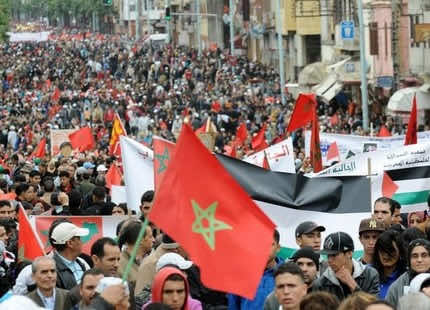 Thousands of people marched through the Moroccan capital on Sunday to protest against unemployment and the cost of living, ahead of plans by the Islamist-led government to push for social and economic reforms.

Protesters marched for “our rights and freedoms” in an action called by two trade unions, chanting slogans against government policies, corruption and the high cost of living, an AFP photographer said.

“Morocco is witnessing social regression,” chanted protesters, including activists from the February 20 pro-reform movement, which was born of the Arab Spring protests sweeping the region in 2011.

They also accused  Prime Minister Abdelilah Benkirane of pushing the country into a “ravine.”

Police said 3,000 marchers took part in the peaceful protest that wound its way to the parliament building in central Rabat. Other estimates said they numbered between 5,000 and 10,000.

The MAP news agency said members of opposition parties as well a human rights activists and civil society figures were also on the streets, alongside activists of the February 20 movement.

The agency quoted unidentified union leaders as saying the march was “a sort of warning” to Benkirane’s government, which is expected in the coming months to implement sweeping reforms as Morocco grapples with economic hardships.

Morocco is facing slower growth and the budget deficit reached over six percent of GDP in 2011, against a backdrop of 30 percent youth unemployment.