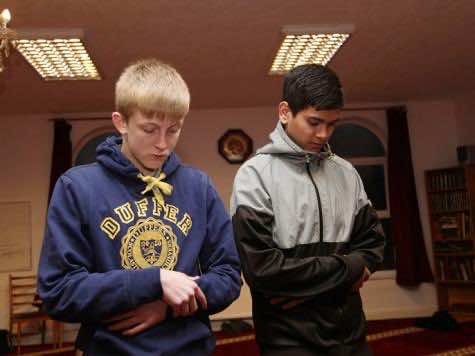 According to several studies conducted in Britain, the number of Muslims in the UK has increased by 37% over the last six years, while the number of mosques has reached 1,500, Al Jazeera reported on Saturday.

With hundreds of British people converting to Islam, the British authorities recently confirmed that the occurrence of conversion is more common among British prisoners and students.

During a tour to Islamic centers, Al Jazeera net has reported that some of the children who converted to Islam are originally from Brazil, Luxembourg, Panama, and Sweden.

During Ramadan last year, Alexandra, the daughter of Tony Blair’s sister-in-law, converted to Islam at age 12.

“Thanks to my mother who took me to conferences I came to know Islam. Converting to Islam has given me much tranquility and soulful satisfaction, ” Alexander said in an interview.

“Islam has changed my life for the better unlike before,” Alexander added.

Aged 14, George, originally from Sweden, for his part, converted to Islam after reading about Islam and identifying with Muslim families in London.

Referring to the biased way and sensational way in which Western media portrays Islam, George said this was part of his initial motivation to study about Islam. “What is all this controversy about Islam for?” George asked his father.

“George’s curiosity to learn about Islam and his love for call prayers has led him to embrace Islam,” Abdellah, George’s close friend, said.

Upon embracing Islam, British converts admitted that they felt inside a deep breath of relief and happiness.

According to the British authorities, the emotional, soulful void felt by the British youth is the principal motive behind seeking Islam as propeller for lasting happiness.