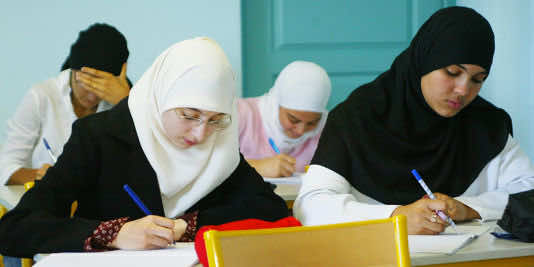 Unlike other high schools in France, where the majority of students are loath to take their classes seriously, students in Averroès High School are the total opposite.

The dedication and hard work of the students in this private Muslim school have made the school rank first at the regional level, and among the top three at the national.

According to the French daily le Monde, Averroès is considered one more educational institution that has managed to make its way, along side other private high schools, to the top of the nation’s list of institutions that provide a good quality education.

On the other hand, the quality of education in French public schools has not been developing in parallel with the needs of French parents as much as private education has managed to do so.

Amidst the harsh international criticism that France has received concerning its strict policies on secularism while being home to Europe’s largest Muslim population, Averroès Muslim High School has been one significant step in rethinking France’s attitude towards Islam in particular, and religious freedom in general.

Having started with only 11 students after its inauguration in 2003, France’s first Muslim private school has grown since then to attain 330 students.

In an interview with the leading French daily Le Monde, Amar Lasfar, rector of the Lille mosque and president of the Averroès school, said: “On our first day, there were 34 journalists, including one from Japan – compared to only 11 students and 19 teachers.”

Asked about the secret behind the success of his school, Lasfar told Le Monde: “Have faith – not necessarily religious faith, but believe in the project.”

Also open to non-Muslims, Averroès, which is a school under contract with the government, has been praised by parents, students and staff for its welcoming atmosphere and serious commitment to providing great quality education to its students.