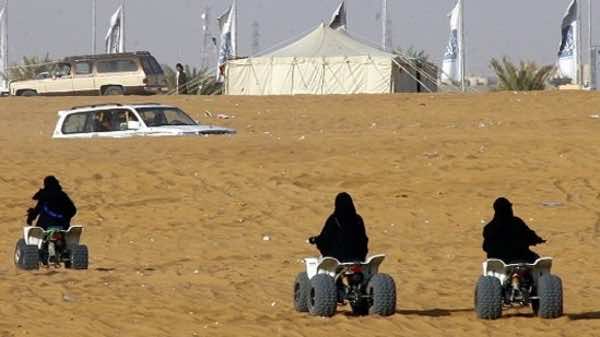 Steering away from the debate over women driving in Saudi Arabia, a religious authority announced this week that Saudi women are allowed to cruise on bikes and buggies.

But women will be free to drive under one condition: a male relative or guardian has to be present with them while they ride a bike, Saudi daily al-Yaum reported on Monday.

“Women are free to ride bikes in parks, seafronts, among other areas, providing that they are wearing fully modest dress and a male guardian has to be present in case of falls or accidents,” the newspaper reported, quoting an unnamed source from the Committee for the Promotion of Virtue and Prevention of Vice.

The Committee said that it never barred foreign women from riding buggies or bicycles.

The source also suggested that riding the bikes should be for recreational purposes but should not be used as a means of permanent transport.

“Our concern is the positive traffic culture and full compliance with traffic rules and regulations by all drivers and riders,” Ali al-Zahrani, the spokesman for the Eastern Province Traffic, told the daily.

The religious authority advised women on their bikes to steer clear from areas with youth rallies, to avoid confrontation with protest groups.

Samia al-Bawardi, the head of an NGO for the victims of car accidents, warned women about riding bicycles and buggies.

“Wearing abayas (the Islamic gown worn by Gulf women) and erratic driving could result in terrible accidents,” she told the daily.

The news comes after the internationally award-winning Saudi film “Wajda”, written and directed by Saudi female director Haifaa al-Mansour, telling the story of an 11-year-old girl growing up in traditional society in the suburbs of Riyadh and desperate for a bicycle, which she’s not allowed.

Women in Saudi Arabia have not been allowed to drive since a formal banning in 1990.

An ongoing debate over the matter and a petition has recently been presented to the country’s Shura Consultative Council, with the hope from Saudi activists to review the case for women driving.