Morocco World News
Home News International Solar Impulse to fly across the US from California to Washington and... 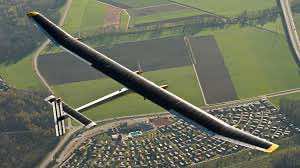 The Swiss solar-powered plane that flew across Morocco to the southern city of Ouarzazate in June 2012 is set to start another flight from the American West Coast to the East Coast, researchers announced Thursday, March 28 at Moffett Air Field at NASA Ames Research Center in Mountain View, Calif.

The plane which has been developed over ten years by the Swiss pilots Bertrand Piccard and Andre Borschberg relies completely on solar power and requires zero fuel. The ultra-lightweight plane has solar panels on the wings that harness power from the sun during the day and store it in special batteries for overnight flights.

The plane’s last 2,500-kilometer (1,550-mile) trip from Switzerland to Madrid, then Rabat and Ouarzazate, Morocco in June 2012 coincided with launch of the World Bank-financed biggest solar project in the world in Ouarzazate which aims at connecting continents with power from the Sahara’s sun.

The Moroccan solar energy project, which is estimated to cost 9 billion US dollars, will make Morocco a reference player in the field of solar energy. “This national, ambitious and realistic project aims at establishing by 2020 a capacity of 2.000 megawatts” said Amina Benkhadra, the former Moroccan Minister for Energy, Mining, Water and Environment.
“This production capacity represents 38 percent of the installed power by late 2008 and 14 percent of the electric power by 2020”, added the Minister, who was presenting to King Mohammed the main points of this project on November 2, 2009 in Ouarzazate Convention center.

The solar Impulse long term goal is to fly around the world, but it seems that this goal needs a lot of preparation as the plane is not yet technically reliable for this challenge. However, the Swiss team is ambitious enough to make this goal realistic. “Today, we cannot imagine having a solar-powered airplane with 200 passengers,” Piccard said. “But when the Wright brothers took flight in 1903 it was exactly the same, and when Charles Lindberg crossed the Atlantic, he was all alone with an airplane full of gasoline.” He added.