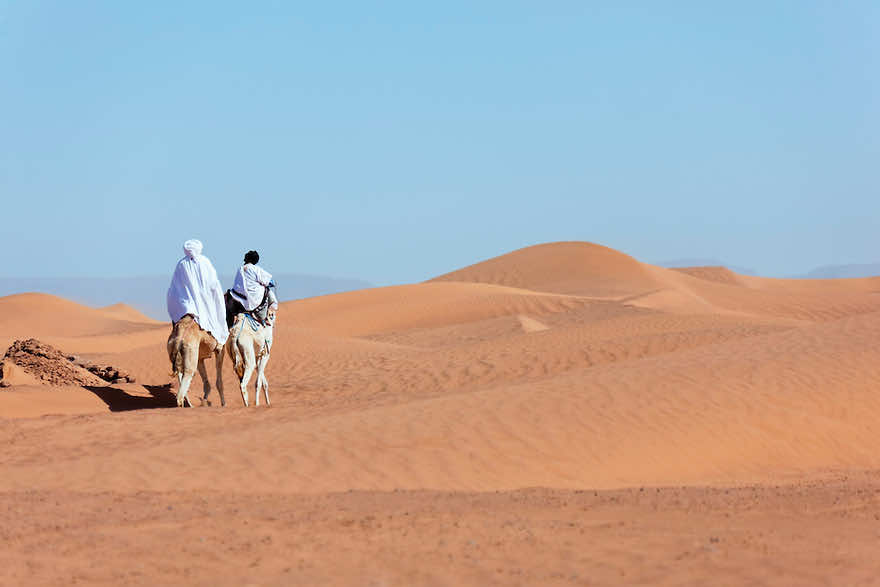 Omar Razzouki gazes intently at the wooden box, marveling at what might be the solution to the perennial water woes that he and other nomads like him across the Sahara desert face daily.

More than 330 million people in sub-Saharan Africa, or around 40 percent of the population, do not have access to clean drinking water, according to a report published to mark world water day by British NGO WaterAid.

The World Health Organisation estimates that this lack of drinking water is the reason for nearly nine out of every 10 deaths linked to diarrhoea. In the Sahara, nomads are among those suffering most from limited access to water, particularly during the hotter periods when rising salt levels in water  drawn from wells make it undrinkable.

The “nomadic festival” held earlier this month in M’Hamid, in Morocco’s southern desert region, was an opportunity for the pioneers of a portable water purification device to showcase their invention. It uses a process as old as the sky.

“It’s simple. It emulates the natural cycle of cloud condensation,” explained Alain Thibault, an ex-sailor who had to confront the issue of fresh water shortages at sea.

The experience gave him the idea several years ago of reproducing the process using just a “small machine that is easy to make and easy to use.” The “waterpod” allows desert-dwellers to turn water extracted from wells into clean drinking water through evaporation and condensation, using the heat  of the sun, a technology that the Arabs were among the first to develop as far back as the 16th century.

The device, which resembles a large letter box, currently costs around 500 euros ($650). But the inventors have already given courses at a college in Tiznit, on Morocco’s Atlantic coast, to teach students how to produce them more cheaply.

“The waterpod is made of wood, cork, stainless steel and glass,” said Thierry Mauboussin, who is helping to promote the water project in Morocco. “It works with solar energy, so no fossil fuel.”

Noureddine Bourgab, the president of the nomad festival at M’Hamid, also praised the environmental value of the new device, which he hoped could “put an end to the problem of salty water for the desert nomads.”

“It’s a technique that embodies the real meaning of sustainable development and protection of the environment,” he said. Razzouki, a nomad from the M’Hamid region, was concentrating hard on figuring out how the waterpod works.

“This could resolve many of our water problems,” he said, noting that the box was light, and “we won’t have the problem of salty water everywhere we go.” M’Hamid El Ghizlane, Morocco’s gateway to the Sahara, is an oasis on the edge of the Draa valley surrounded by rolling sand dunes, 40 kilometres (25 miles) from the Algerian border.

The construction 40 years ago of a hydro-electric dam further up the valley to provide for the growing population and tourist trade at Ouarzazate, along with the relentless desertification of the region, has taken a heavy toll on water supplies.

So there are high hopes for the waterpod, one of which can produce six litres of pure water daily from 12 litres of brackish water, according to its creators.

They give it an estimated lifespan of 20 to 40 years, with just a daily clean needed to keep it in good condition.