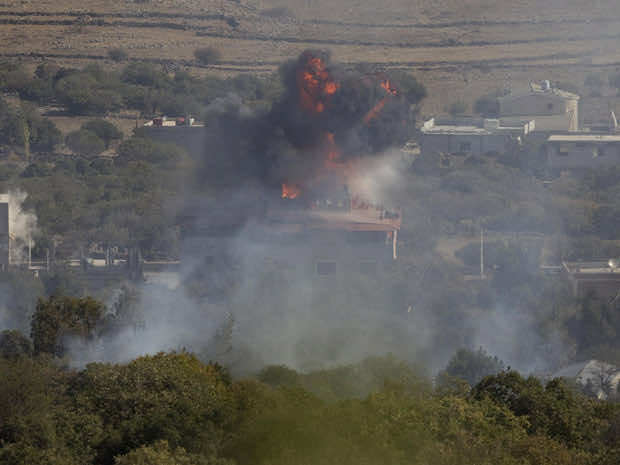 Israeli tanks fired into Syria on Tuesday after shots were fired at troops in the occupied Golan Heights, a military spokeswoman said, in a further spill over of the Syrian civil war.

“Shots were fired at an IDF (Israel Defence Forces) patrol on the border. No injuries or damage was caused. In response, IDF forces returned precise fire at the source and reported a direct hit,” the spokeswoman said.

The U.N. Security Council voiced concern last week about the increasing spill over into the Golan Heights of the civil war being fought between forces loyal to Syrian President Bashar al-Assad and rebels trying to topple him.

Earlier on Tuesday a mortar shell fired during fighting between Syrian forces and rebels landed in the Israeli-controlled territory of the Golan Heights, military sources said.

It was unclear whether the gunfire or the shell were deliberately aimed at Israeli forces and the spokeswoman said it was not known whether they were fired by Assad’s forces or the rebels.

The shell landed in an open area near an Israeli settlement and caused no injuries, a military source said.

Shells have fallen several times inside Israeli-controlled territory and some incidents have drawn Israeli return fire.

Israel captured the Golan Heights from Syria in a 1967 war and annexed the strategic plateau in 1981 in a move that has not won international recognition. U.N. peacekeepers monitor the ceasefire line.

The Israeli military said it had conveyed an official protest over the incidents with the U.N. Disengagement Observer Force (UNDOF), which monitors a 45-mile (70-km) “area of separation” between Syrian and Israeli forces.

Defence Minister Moshe Yaalon, touring the Golan Heights earlier on Tuesday, said Israel would not intervene in Syria unless Israeli security was compromised.

“We have acted against this and we will act in the future in order to prevent such weapons falling into the hands of irresponsible elements,” Yaalon said.