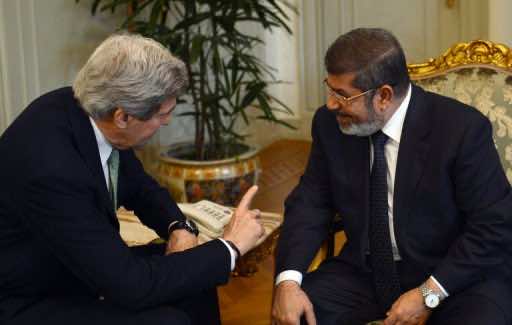 The United States has “real concerns” about the direction being taken by the Egyptian government following recent arrests and political violence, Secretary of State John Kerry said Tuesday.

“We have put a series of real choices to the government of Egypt, but in the end they have to make those choices,” Kerry told reporters after talks with his South Korean counterpart Yun Byung-se.

Kerry, who visited Egypt in March, unlocking some $250 million in US aid to help revive the economy, admitted President Barack Obama and the administration “share real concerns about the direction that Egypt appears to be moving in.”

“It is our hope that there is still time to be able to turn a corner,” he said.

“But the recent arrests, the violence in the streets, the lack of inclusivity with respect to the opposition in public ways that make a difference to the people of Egypt, are all of concern today.”

There has been increasing concern in the West about a number of legal complaints against journalists, which have cast doubt on President Mohamed Morsi’s commitment to freedom of expression.

Greater press freedom was also one of the key demands of the popular uprising that toppled long-time leader Hosni Mubarak in 2011.

Egypt’s prosecution on Tuesday was probing complaints of “threatening public security” against a popular satirist, Bassem Youssef, who is already on bail facing charges of insulting the president and offending Islam.

Human rights lawyers say there have been four times as many lawsuits for insulting the president under Morsi than during the entire 30 years of Mubarak’s rule.