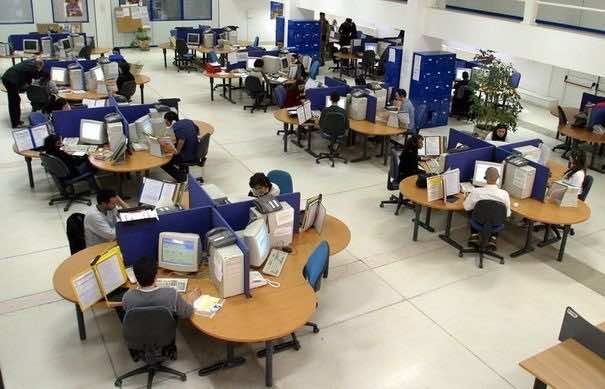 Strikes and social unrest have hampered development in the country, amid disappointment at the government’s failure to improve living conditions more than two years after the revolution, which was fuelled by similar grievances.

“No to repression,” “2003 salary = 2013 salary” and “Stop discrimination” read the slogans brandished on placards by company “advisers,” who handle calls from French or Canadian clients of phone operators Orange, SFR, Bell Canada and Free.

“Normally our salaries should have risen. But in fact they are falling. Only half of us are paid bonuses, and we don’t have medical insurance,” said Mouna Chartani, employed at the Ben Arous centre in a suburb of Tunis since 2007.

“We are venting our bitterness at being exploited in our own country for 450 dinars (225 euros) while they earn billions from our efforts,” lamented the mother of two, saying she has been unable to pay for an urgent thyroid operation.

Sami Houli, a union representative of Teleperformance Tunis, reckoned the three-day strike to demand better wages and working conditions, which began on Monday, had virtually paralysed four call centres, with the two others working normally.

Employed at the Charguia centre, in another Tunis suburb, Houli said the firm refused to negotiate and claimed he was attacked by three officials on Tuesday morning.

“They punched me in the face and hurt my wrist. The doctors told me not to work for five days,” he added, showing the doctor’s note. Members of France’s SUD-PTT trade union, visiting the North African country to take part in last week’s World Social Forum, turned out on Tuesday to support their Tunisian colleagues.

They were sharply critical of Teleperformance, which says it operates in 49 countries, boasts over 135,000 employees worldwide, including more than 6,000 in Tunisia, and generated almost 3.0 billion dollars in revenues in 2011.

“This company behaves everywhere like gangsters and thugs,” shouted Frederic Madelin, one of the French strikers, to cheers from the crowd.

The union’s secretary general, Nicolas Galepides, says Teleperformance’s directors have badly managed a dispute that has been rumbling for months.

At the end of February, after a disciplinary committee meeting, half a dozen employees were fired. In a bid to reverse the decision, three unionists locked themselves in a meeting room at the company’s headquarters, and have yet to come out pending a resolution of the dispute.

“The reasons for their dismissals were fabricated and they realised it, and that led to the demands over wages and working conditions,” said Galepides.

Since the start of the strike on Monday, the company’s Tunisian branch has declined repeated AFP requests for comment on the accusations. But the headquarters in Paris issued a statement insisting workers’ salaries in Tunisia had risen, by five percent in 2012 and six percent in 2013, claims categorically denied by the striking staff.

Discontent is rife in parts of Tunisia, whose economy has struggled to pull itself out of the recession that followed Zine El Abidine Ben Ali’s ouster in the January 2011 uprising, with unemployment pegged at about 17 percent.

For some employees at Teleperformance, however, it is the ongoing strikes themselves that are undermining businesses and preventing recovery.

“It is blackmail in the revolutionary style: we threaten in order to get what we want. This is not my style,” said the non-striking employee.