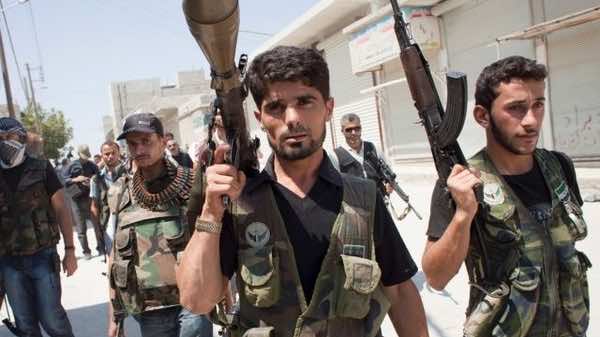 American and Jordanian efforts to train Syrian opposition fighters have stepped up, the Washington Post reported on Wednesday, following reports that the training has been focused on anti-tank weaponry.

The report on Wednesday, citing U.S. and Jordanian officials, stated that training – which reportedly began last year – could also be used to establish a buffer zone along Syria’s southern border.

“Jordanian security officials said a previous timetable to complete training of about 3,000 Free Syrian Army officers by the end of June has been moved up to the end of this month in light of the border victories,” the Post reported.

A buffer zone would essentially aim to “aim to convert areas now in rebel hands into permanent havens for thousands of army defectors and displaced civilians in the area and allow easy access for humanitarian aid,” the report added.

“Buffer zones on the Syrian side of the border is the only way to keep the conflict away from Jordan,” Mahmoud Irdaisat, head of the Amman-based Center for Strategic Studies at the King Abdullah II Defense Studies Academy, told the Post.

Last month, German newspaper Der Spiegel quoted what it said were participants and organizers in the training, adding that there were doubts over whether the Americans worked for private firms or were from the army, although some reportedly wore uniforms.

Spiegel said the training focused on use of anti-tank weaponry.

Jordanian intelligence services are involved in the program, which aims to build around a dozen units totaling some 10,000 fighters to the exclusion of radical Islamists, Spiegel reported.

“The Jordanian intelligence services want to prevent Salafis (radical Islamists) crossing from their own country into Syria and then returning later to stir up trouble in Jordan itself,” one of the organizers told the paper.

A spokesman for the U.S. Defense Department declined immediate comment on the Spiegel report. The French foreign ministry and Britain’s foreign and defense ministries also had no comment.

More than 70,000 people have been killed and 1 million refugees have fled the Syrian conflict.

It started as pro-democracy protests but has turned into a sectarian war between rebels mainly from Syria’s Sunni Muslim majority and state forces defending President Bashar al-Assad, who follows the Alawite faith derived from Shiite Islam.

The United States has said it would provide medical supplies and food directly to opposition fighters but has ruled out sending arms for fear they may find their way to Islamist hardliners who might then use them against Western targets.