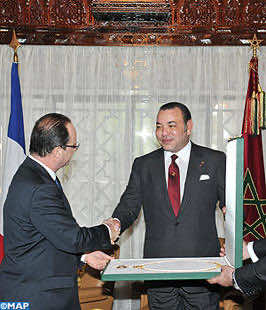 King Mohammed VI gave a speech during the official dinner offered, on Wednesday, in honor of French president François Hollande who is on a visit to the Kingdom.

Praise be to God     May peace and blessings be upon the Prophet, His Kith and Kin

It gives me great pleasure, personally and on behalf of the Moroccan people, to welcome you, Mr. President, and the members of the important delegation accompanying you to Casablanca, this metropolis which embodies, more than any other of the Kingdom’s cities, the great human and cultural symbiosis characterizing the bonds between our two nations.

We are delighted to welcome the President of a great nation, France, a country for which Moroccans have a deep affection and great esteem.

The relationship between Morocco and France is undoubtedly exceptional. Not only do we share a long history and a particularly rich human and cultural heritage, but our relations are also getting stronger by the day, thanks to promising economic ties.

This relationship is unique because it has been forged by increasingly determined men and women. Indeed, the contribution made by actors from both sides, whether they are business leaders, local authorities, civil society or community representatives, is invaluable.

I should like to take this opportunity to pay special tribute to our expatriate communities, in France and in Morocco, who are contributing to the consolidation of our relations through their active involvement, their dynamism and their creativity.

One of the distinctive features of this vibrant relationship is the ability of both countries to constantly adapt to our changing societies and economies, and to update and revamp our cooperation mechanisms.

I should like to reiterate my commitment to further develop and expand our relationship so that it may serve a much more ambitious Moroccan-French agenda.

In this respect, I would like education and training to form the bedrock of our partnership, given their important role in spurring competitiveness and innovation, creating stable jobs and promoting renewable energies as well as the “new economy”.

These objectives, coupled with the ambition we nurture to cater for the well-being of young people in both countries, would further stimulate the extraordinary complementarity between our economies and boost synergies. Mutually advantageous opportunities would thus be created in the areas of trade, market access and public-private partnerships.

As we combine efforts and make the most of our respective assets through joint investment projects, we will, together, achieve the results we probably would not be able to accomplish separately.

As we identify new ‘niches’ for joint ventures, like the global businesses we are currently exploiting – the car industry, the aviation industry and agribusiness – we will find and capitalize on new prospects for additional growth.

It is only natural that Morocco and France should be key players in a forward-looking partnership between the two shores of the Mediterranean.

Having benefited, since 2008, from an Advanced Status with the European Union, Morocco’s ambition is to constantly do more and better in its relationship with the EU through the conclusion of new agreements.

At the same time, the construction of a stable, solidarity-based Maghreb remains a key, geostrategic priority for the Kingdom of Morocco.

I am convinced that the advent of a new Maghreb order – a longstanding and long cherished goal – would make it possible for the five Maghreb countries to work in good faith and unlock the region’s full potential in terms of solidarity, complementarity and integration prospects.

Thus, the 5+5 Initiative and the strategic coherence underpinning the Western Mediterranean region could be more effectively built upon, allowing us to make the most of such assets as human and geographic proximity, wide-ranging affinities, logistics and energy connections.

Given the above, Morocco is particularly eager to work jointly with France on a new Euro-Mediterranean pact in which democracy, solidarity and prosperity are properly balanced.

In this respect, the brilliant concept you have put forward, namely that of a “project-based Mediterranean”, is both inspiring and promising. I am sure it can lead to new, concrete and practical partnership mechanisms in the Mediterranean.

The Kingdom of Morocco has been working untiringly for a just and lasting settlement of the conflict in the Middle East. In this regard, my country hopes the international community will, at last, push forward the Palestinian-Israeli peace process, and thus put an end to an occupation which is inflaming a region that has recently been facing the hardships of difficult transitions.

It is regrettable that the international community has not been able to end the humanitarian tragedy endured by civilian populations in Syria; nor has the world community managed to help the opposition coordinate its dispersed actions on the ground. This is delaying the inevitable political transition process in the country.

As regards Africa, a continent rich in human, cultural and natural resources, our two nations nurture the same ambition. Indeed, we are guided by the same conviction that it is crucial to ensure the conditions of peace, security and stability for all African countries. This is a sine qua non for the consolidation of the foundations of democracy, progress and human development.

I wish to reiterate, in this respect, the Kingdom of Morocco’s support for France’s courageous and determined action which, today, is making it possible for a sister nation, Mali, to regain  control over all its territory and uphold its legitimate national choices.

The Kingdom of Morocco is pursuing its efforts with resolve and a keen sense of purpose to build an open, dynamic society which is proud of its history.

This solid, rallying policy enables Morocco to strengthen its institutional order which provides for solidarity between all components of society and for respect for everyone. It is an institutional order that allows for a harmonious blend of territorial and cultural diversity.

This is the philosophy underpinning our major project for Advanced Regionalization as well as the proposed Autonomy Plan for the Sahara region; the latter is the only way to settle a regional dispute that continues – sadly – to compromise the future of the Maghreb.

The Kingdom of Morocco is proud of France’s constant support for the success of the major projects and key plans my country seeks to implement.

I am sure your State Visit to Morocco will allow us to consolidate the many affinities between our two countries and our two peoples.

Needless to say, this will further invigorate our partnership in all spheres of activity which offer so much hope and on which we see eye to eye.

Nonetheless, and beyond these promising bilateral prospects, our cherished ambition is for Morocco and France to help formulate, in the Mediterranean basin, smart, innovative ideas for a new ethical order in the relations that exist between Africa, the Arab-Muslim world and Europe; an order that would foster the values of mutual aid and solidarity, promote sustainable human development and make socio-economic disparities an engine for the creation of shared wealth.

I ask you to rise to pay tribute to Mr. François Hollande, President of the French Republic. Long live the friendship, the deep, abiding trust and the mutual esteem between the Moroccan and the French peoples.