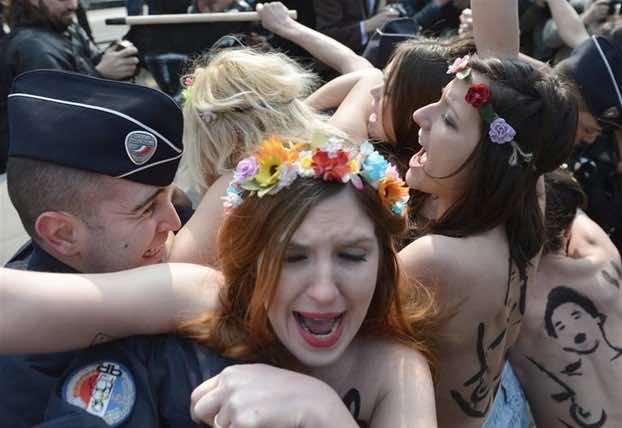 Bare-breasted activists staged rallies in front of mosques and Tunisian embassies across Europe Thursday against what they called an Islamist crackdown on Arab women’s rights. Protesters from the Ukrainian women’s power group Femen held “International Topless Jihad Day” in capitals such as Berlin, Kiev and Paris and painted their torsos with slogans including “Bare breasts against Islamism”.

“We’re free, we’re naked, it’s our right, it’s our body, it’s our rules, and nobody can use religion, and some other holy things, to abuse women, to oppress them,” Femen member Alexandra Shevchenko said at a small demonstration in front of a Berlin mosque amid temperatures near the freezing point.

“And we’ll fight against them. And our boobs will be stronger than their stones.”

The rallies targeted in particular the case of a Tunisian activist calling herself Amina Tyler who sparked a scandal last month when she posted pictures of herself online with the words “My body belongs to me” and “Fuck your morals” emblazoned across her naked breasts. Supporters fear she could face criminal prosecution.

Police in Kiev detained two young activists with “Free Amina” on their exposed chests immediately after their arrival in front of the city’s sole mosque.

Around two dozen topless feminists in Paris whose bodies were tagged with “No Islamists” and “No sharia” tried to approach the Tunisian embassy but were deterred by police as they emerged from the subway, an AFP photographer said.

And in Brussels a small group of women stripped to the waist gathered in front of the Grand Mosque shouting “Fuck your morals” and “Free Amina”, while three protested briefly outside the Tunisian consulate in Milan.

Tunisia was once seen as one of the Arab world’s most progressive countries on women’s rights.

But NGOs have accused the Islamist party Ennahda, which came to power after the revolution that overthrew Zine El Abidine Ben Ali’s regime in 2011, of seeking to roll back women’s rights.

They say those rights must be enshrined in a new constitution expected this year.

The Femen group has been making headlines since 2010 for eye-catching feminist, pro-democracy and anti-corruption protests.