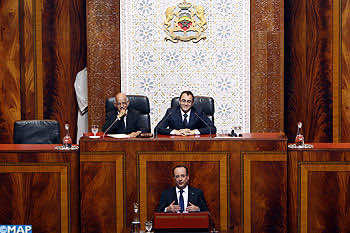 French President Francois Hollande on Thursday hailed “decisive steps” taken by Morocco towards democracy, while acknowledging “impatience” at the slow pace of reform.

“Every day, your country takes decisive steps towards democracy,” he said in a speech to parliament on the second and final day of a visit to the northAfrican country that has been overshadowed by a tax fraud scandal rocking the French government.

He praised in particular a new constitution introduced by King Mohammed VI in 2011 in response to Arab Spring protests then sweeping the region, saying it guaranteed “tolerance” and “recognised the diverse character of Morocco’s identity.”

A key aspect of the text was its support for the country’s large Berber community, with their Amazigh language officially recognised.

But opposition activists have criticised the constitution as not going far enough in curbing the king’s formerly near-absolute powers, and many have voiced frustration at the slow progress in translating the proposed changes into law.

“Of course everything does not go as quickly as some would like, There are always criticismsimprovements. That is is your responsibility. And our duty is to accompany you,” the president said.

“I also know that, despite this progress, the are still expectations… There is impatience everywhere… But I know that you have the desire to face up to and achieve what you have promised.”