By Hassan Benmehdi and Naoufel Cherkaoui 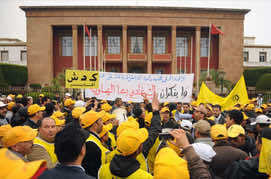 By Hassan Benmehdi and Naoufel Cherkaoui

Morocco is linking up with foreign and local groups to help tackle the long-simmering problem of economic despair facing the nation’s young people.

Thousands marched through Rabat on Sunday (March 31st) at to express their displeasure over the government’s failure to address unemployment and rising costs in the national march against government “indifference”.

Faced with a budget in the red and a weak economy, authorities are turning to NGOs and outside help to bridge the gap.

Amid this climate, Youth and Sports Minister Mohamed Ouzzine said last week that 2013 would be “the year of projects benefiting all Moroccan youth”.

In one project to boost job creation, the World Bank will help build Morocco build a national entrepreneurship programme.

The “Mawahib Biladi” (Talents of My Country) project will explore the abilities of young people and carefully monitor them so they can realise their potential.

The lack of channels of communication between the department and the youth associations make the process highly inefficient, he added.

Regarding youth political participation, the results of a study presented recently at the Faculty of Law and Humanities in Casablanca showed that Moroccan youth are interested in politics. However, they lack of possibilities to participate and limited chances of achieving impact that cause them to lose motivation.

Employment and Vocational Training Minister Abdelouahed Souhail said that the inadequacy of young peoples’ profiles as compared to the needs of the labour market is the real problem for those seeking employment.

“This is a big social problem that requires the involvement of all parties to solve it and to show a good path to our youth,” he said.

Foreign governments are not the only group offering its assistance to Morocco’s youth.

Students from the National School of Mineral Industry (ENIM) in Rabat held a four-day event encouraging youth to be creative and to participate positively in society in light of the winds of the Arab Spring.

“The phase experienced by Morocco and the rest of the Arab region confirms that the time of change has come and has become an unavoidable necessity. The last word now is with young people who could create change for the better and move their countries towards development and progress,” organising committee member Zakaria ben Rahhou told Magharebia at the March 18th-22nd event.

“We want to change stereotypes about the Arab mind which is termed as backward,” he said adding that Arabs were innovative thinkers “throughout the ages”.

Ben Rahhou added that they were working to revive this idea in youth and encouraging them to realise ideas they believe in, “in the framework of a spirit of creativity and innovation unbound by limits”.

“We hope this success becomes the norm rather than the exception in the perception of Moroccan youth in general,” he added.

Young Moroccan innovator Abdellah Chakroun is an example of what Ben Rahhou described. He has registered 35 inventions and managed to accomplish his first invention at the age of 18.

Turning down offers to work for western companies, Chakroun is choosing a different route.

“I would like to set up a company that works to discover the talents of Moroccan students, and invests in them through giving them a new vision. In addition, this will change the perception that the West is the most creative, and the way to achieve this is to rely on knowledge,” Chakroun said.

“The progress or failure of our country is in our own hands, we the young. We must start the change from within ourselves by changing defeatist ideas,” he said.

“We decided to set up this association in order to bring about change within the community by launching social programs and projects, where youth are the main engine via new ideas,” the association’s president added.