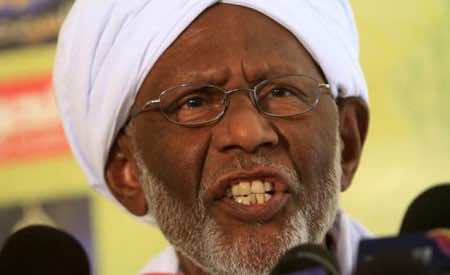 The “revolutionary” regime of Egyptian President Mohamed Morsi should foster tighter ties between its people and those of neighbouring Sudan, veteran Islamist Hassan al-Turabi said on Friday.

Speaking after he and other political party figures met the visiting Islamist leader, Turabi said grassroots links must be developed because Morsi’s regime “is a popular government elected by the people.”

“The people should be linked with the people. It’s more lasting than a government with a government, especially one which is revolutionary and one which is a dictatorship,” he told AFP, using the latter term to describe the 24-year regime of President Omar al-Bashir.

Morsi, a former Muslim Brotherhood leader, assumed office last June after a popular uprising toppled long-time president Hosni Mubarak in 2011 as part of the Arab Spring uprisings in the region.

He is on the final day of his first visit to Sudan, which Egypt jointly ruled with Britain until 1956.