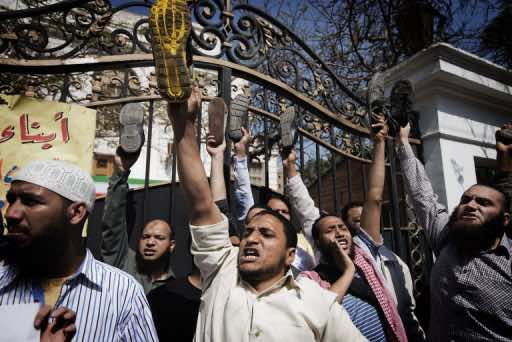 Egyptian Islamist protesters threw stones at the house of Iran’s envoy in Cairo on Friday and tried to scale the villa’s walls but were blocked by police, a police official said.

The Islamists, who object to a thaw in relations between Egypt and Iran, were also prevented by police from raising the flag adopted by Syrian rebels against Tehran’s close ally President Bashar al-Assad over the envoy’s house.

They threw stones at the building as some held banners calling for the envoy’s expulsion and opposing the “spread of Shiite Islam” practised by most Iranians.

Hardline Sunni Islamists consider Shiites to be heretics and have opposed the detente between Cairo and Tehran after Islamist President Mohamed Morsi’s election in Egypt last June.

Morsi is a strong backer of the mostly Sunni Syrian rebels but has insisted that Iran could help find a political solution to the civil war raging in Syria.

Egypt and Iran severed ties after the 1979 Islamic revolution brought to power a theocratic government in Tehran that opposed Egypt’s peace treaty with Israel.