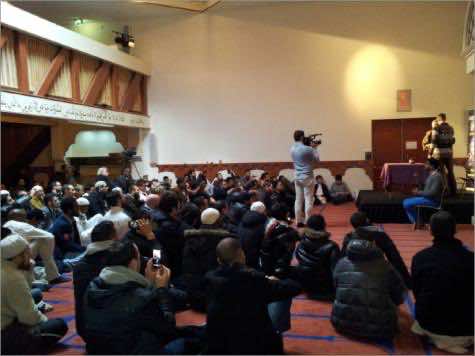 The New Muslims Forum closed its sixth edition on Sunday March 31 in The Blue Mosque, Amsterdam. Attended by more than 1500 participants, nine of whom declared their conversion to Islam, the Forum was meant to connect the new Muslims of the Netherlands, teach them Islam through a set of lectures and allow them to exchange their experiences.

According to Al Jazeera, Nine the Dutch people -3 men and 6 women – publicly announced their conversion to Islam by the pronunciation of the ‘shahadha’ on the occasion of the forum, while many of the attendees preferred to remain reticent about their conversion- especially with the remarkable presence of journalists and cameras- to avoid any unwanted reactions from their relatives and friends.

The organizers explained that the number of people registered to attend the sixth edition of the forum amounted to 1500, stressing that the number of Muslims in Europe, particularly in the Netherlands, has remarkably skyrocketed in recent years.

Among the speakers in the forum were the famous American preacher cheikh Youssef Estes and the Greek preacher sheikh Hamza Tzortzis, as well as other preachers from Egypt. Many observers justify the quick spread of Islam in the West on the grounds that Islam compensates for the spiritual void among many Westerners who wholly succumb to the postmodern material life.

In a statement to Aljazeeranet, the former Ralf Fris who became cheikh Rafiq Ahmad Fris says: “I used to feel a spiritual void that neither my family who abandoned religions, nor the Calvinist reformist church, nor music could fill. Rather, my openness to other cultures, tolerant social interaction, and the spiritual and metaphysical confusion I had with Christianity led me to be a Muslim.”

It’s noteworthy that Islam is the second largest religion in Europe after Christianity. There are large indigenous Muslim minorities in the Balkans and Eastern Europe. In Western Europe, the majority of Muslims are either migrants recruited as ‘guest workers’ in the 60s and 70s or part of the postcolonial wave of immigration. In the Netherlands, the number of Muslims amounted to 950,000 at the start of 2011; most of these Muslims are Turks and Moroccans.