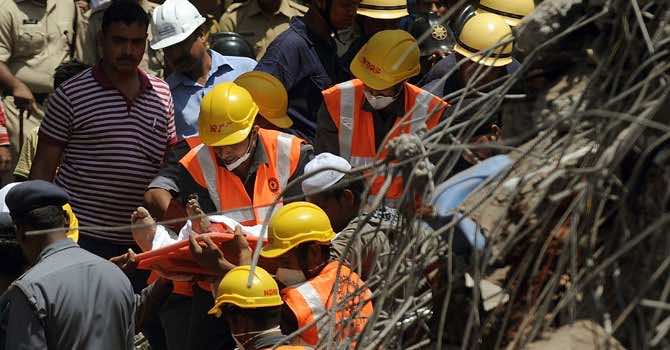 The number of people killed when an unauthorised apartment block collapsed on the outskirts of Mumbai has risen to 63, police said on Saturday, as bulldozers were brought in to help find survivors.

The seven-storey partly built structure caved in on Thursday, leaving a mangled heap of steel and concrete about eight metres (26 feet) high that rescuers and local residents struggled to cut through.

Rescue efforts continued on Saturday with bulldozers clearing the debris from the site in Thane district, about 35 kilometres (20 miles) from the centre of Mumbai.

“We can confirm that 63 people have lost their lives so far,” a senior police officer in the local police control room told AFP.

“Rescue efforts are on because some people may be still trapped inside the debris,” said the officer, who did not want to be named.

The Maharashtra state government has announced a probe into the incident and suspended a top civic administrator and a police officer for dereliction of duty, local media reported.

Building collapses are a common occurrence in India, where a booming economy and rising real estate prices have led to a mushrooming of multi-storey structures, often unauthorised, on the outskirts of cities and towns.

The victims of the latest tragedy were mostly poor daily wagers working at the construction site and their families.