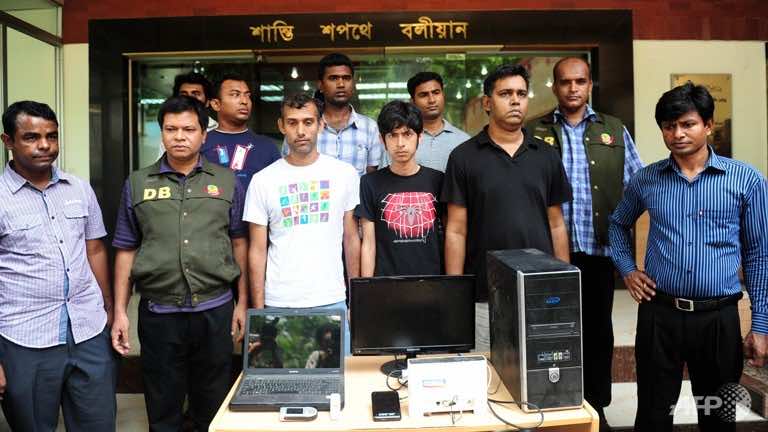 Hundreds of thousands of Islamists rallied in Dhaka after an overnight “long march” to the Bangladeshi capital, demanding the execution of atheist bloggers for defaming Islam.

It is the latest protest to rack Bangladesh, deepening tensions between secularists and the largest Islamic party, Jamaat-e-Islami, whose leaders are under trial for crimes committed during the country’s 1971 war of independence.

The Islamists converged on Dhaka’s main commercial hub to protest against what they say are blasphemous writings by atheist bloggers, defying a pro-government national strike by secular protesters — who staged a smaller rival protest in Dhaka Saturday — aimed at resisting the march.

Police said about 100,000 people attended the rally during which protesters chanted “God is great, hang the atheist bloggers”.

Protest organisers, who called the rally the “long march” with many travelling from remote villages, put the number at more than half a million, as Dhaka’s Motijheel commercial area turned into a sea of white robes.

“I’ve come here to fight for Islam. We won’t allow any bloggers to blaspheme our religion and our beloved Prophet Mohammed,” said Shahidul Islam, an imam at a mosque outside Dhaka who walked 20 kilometres (13 miles).

Hefajat-e-Islam, an Islamic group which draws support from tens of thousands of seminaries, organised the rally in support of its 13-point demand including enactment of a blasphemy law to prosecute and hang atheist bloggers.

There has been vociferous debate between staunch atheists and fundamentalists in Bangladesh’s social media for years, but it took a deadly turn in February when an anti-Islam blogger was murdered.

This week four online writers were arrested on charges of hurting religious sentiment through their Internet writings against Islam.

Following recent protests over the on-going war crimes tribunal the government has blocked about a dozen websites and blogs to stem the unrest. It has also set up a panel, which includes intelligence chiefs, to monitor blasphemy on social media.

Under the country’s cyber laws, a blogger or Internet writer can face up to ten years in jail for defaming a religion.

Dhaka has been virtually cut off from the rest of the country since Friday afternoon — when secularists called a 22-hour nationwide strike to obstruct the march — as private transport operators stopped services fearing clashes between Islamists and secular protesters.

Hefajat-e-Islam has accused the government of ordering the transport shutdown to try to foil its march to the capital. While the secularists claim the main goal of the march is to halt the war crime trials of Jamaat-e-Islami leaders, a charge the Islamists deny.

On Friday, a ruling party activist was shot dead after the secularists clashed with hundreds of seminary students holding a rally in support of the march, local police chief Yasir Arafat told AFP.