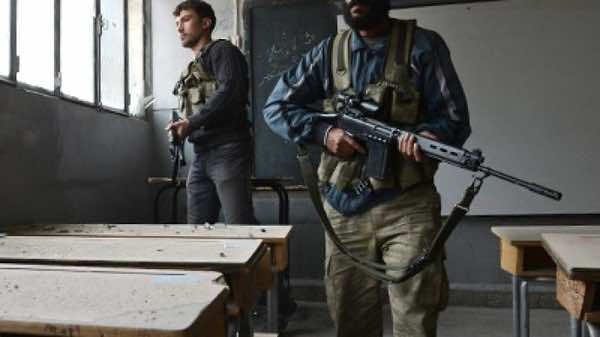 Four Italian journalists have been kidnapped in the north of Syria, on the border with Turkey, the Italian Foreign Ministry confirmed late Friday.

The war-torn country is being described as the world’s most dangerous place for journalists.

The foreign ministry confirmed the report “indicating that it has followed the developments from the very beginning,” according to the ANSA news agency. It also called for “maximum discretion,” stressing that “the physical safety of the hostages remains the absolute priority.”

The Italian authorities said they had been monitoring the case from the start but called for “maximum discretion”, insisting that “the physical safety of the hostages remains the absolute priority”, the ANSA report said.

The La Repubblica website said the abducted were three freelance journalists and one reporter working for the Italian public broadcaster RAI.

The newspaper said the journalists were kidnapped “by a rebel group” while out filming.

The website of the La Stampa daily added that the four were taken overnight Thursday to Friday.

Their families have already been informed, the foreign ministry said.

In February, an Italian citizen and two Russians kidnapped on December 12 in the west of Syria were freed as part of an exchange for militants.

Last month, a Ukrainian journalist escaped from her kidnappers in Syria and was heading to the capital Damascus, according to her nephew Monday.

“She escaped this morning. We spoke by telephone with her for a couple of minutes. She said people were taking her to Damascus,” her nephew, Dmitry Astafurov, was quoted by the Interfax news agency as saying.

The Ukrainian foreign ministry confirmed Ankhar Kochneva was free after several months in captivity but said it had no further information on the matter.

Syria’s government on Tuesday offered kidnappers an amnesty deal, giving them 15 days to hand over victims or face sentences ranging from life with hard labor to execution, if their victims were murdered or sexually abused.