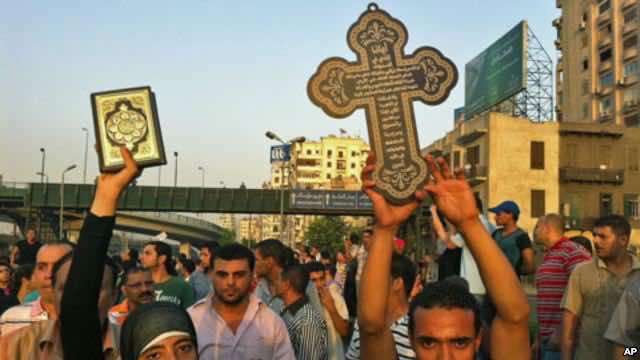 The clashes, which saw the use of firearms, flared on Friday night in Al-Khusus, a poor area in Qalyubia governorate, after a Muslim in his 50s objected to children drawing a swastika on a religious institute, the source told AFP.

The man insulted Christians and the cross, and an argument broke out with a young Christian man who was passing by, which escalated into a gun battle with live rounds and automatic weapons between the Muslims and the Christians.

“Five people were killed in the clashes, including four Christians. In addition to this, six others were wounded, at least two of whom were suffering gunshot wounds,” the source added.

As many as seven people may have been killed, said Tony Sabri, an activist from the Coptic Maspero Youth Movement, told AFP by phone from the Al-Mataraya Hospital, near to where the clashes took place.

A number of angry Muslim residents tried to surround the town’s Mary Jirjis church, but the security presence in the area stopped them from doing so.

Both sides then lit tyres in the narrow streets where residents live in crowded slum housing.

“No houses were burned in the confrontations that went on through Friday night and Saturday morning,” the security source said. “The authorities are in complete control of the town.”

The country’s Coptic Christians and Muslims have clashed on several occasions since the revolution that toppled the former president Hosni Mubarak in February 2011.

Such clashes have seen members of both communities killed, especially in poor areas in the south of the country.