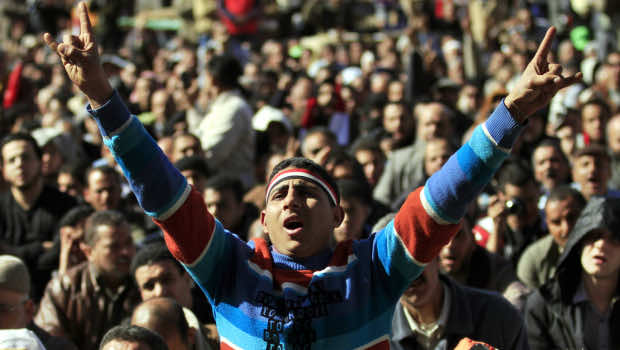 Several thousand people rallied in Egyptian cities on Saturday to mark five years since the founding of a protest group
that helped overthrow president Hosni Mubarak and now opposes his successor Mohamed Morsi.

Supporters of the April 6 movement held rallies in the Nile Delta industrial town of Mahalla, where a labour strike turned into deadly clashes with police five years ago.

The Mahalla clashes on April 6, 2008 marked an escalation in the burgeoning protest movement against Hosni Mubarak, eventually overthrown in an early 2011 popular uprising.

Activists with the group also rallied outside the public prosecutor’s office in Cairo and in the coastal city of Alexandria.

Hailed as heroes in the aftermath of Mubarak’s overthrow, the youth-led group, which splintered into two factions, clashed with the military that ruled Egypt between Mubarak’s ouster and Morsi’s election in June.

The group is now part of a coalition of secular leaning movements which have held sometimes violent protests against the Islamist Morsi, whom they accuse of mimicking Mubarak’s practices.