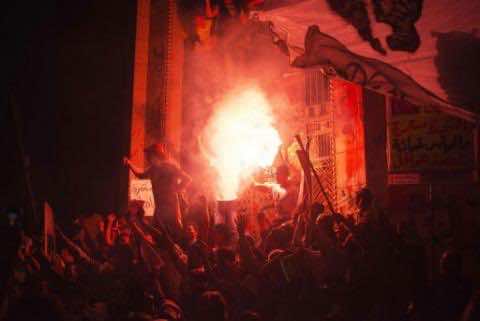 Protesters battled police in several Egyptian cities on Saturday, with at least eight people reported injured, after rallies to mark the anniversary of a key opposition movement turned violent.

In central Cairo, police fired tear gas at hundreds of protesters outside the Superior Court, which also houses the offices of the public prosecutor who had opened investigations against several dissidents.

Live television showed footage of protesters throwing stones at police in armoured vehicles, amid burning tyres on a main road near the court. The police fired heavy volleys of tear gas.

At least eight people were wounded in the clashes in Cairo and in the southern province of Fayoum, the official MENA news agency reported.

Police also fired tear gas at protesters in the coastal city of Alexandria and in the Nile Delta city of Mahalla, where demonstrators attacked a police station with petrol bombs, MENA reported.

The rallies were organised to mark the fifth anniversary of the April 6 protest movement, which took off after a deadly police crackdown on a labour strike in Mahalla on April 6, 2008.

The Mahalla clashes marked an escalation in the burgeoning protest movement against long-time strongman Hosni Mubarak, eventually overthrown in an early 2011 popular uprising.

Hailed as heroes in the aftermath of Mubarak’s overthrow, the youth-led group, which splintered into two factions, clashed with the military that ruled Egypt between Mubarak’s ouster and President Mohamed Morsi’s election in June.

The group is now part of a coalition of secular-leaning movements which have organised sometimes violent protests against Morsi, who they accuse of mimicking Mubarak’s practices.

Morsi has faced an intractable opposition which spearheaded mass rallies after the Islamist adopted broad powers in November that have since been repealed.

Two years after the uprising that overthrow Mubarak, Egypt is still trying to find its footing in a declining economy and often violent protests that have kept away much needed tourist revenues and foreign investments.

The country is in talks with the International Monetary Fund for a $4.8 billion loan aimed at restoring investor confidence.

The loan, initially expected to arrive in December or January, was delayed after Morsi, fearing further unrest, cancelled a tax increase and cutbacks in state subsidies, part of economic reforms demanded by the IMF.