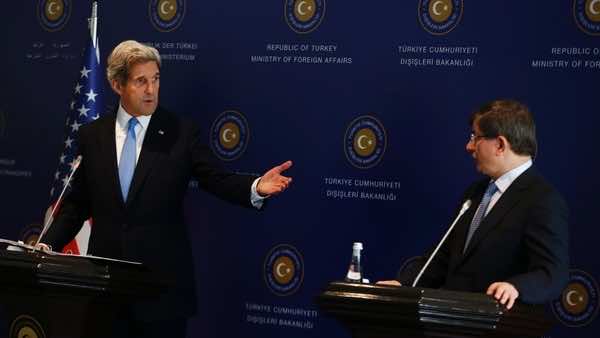 U.S. Secretary of State John Kerry on Sunday called on Turkey and Israel to fully normalize their ties, two weeks after the Jewish state’s U.S.-brokered apology for a deadly 2010 raid on a Gaza aid flotilla organized by a Turkish charity.

The top U.S. diplomat also warned Iran that time is running out on nuclear negotiations between the Islamic republic and world powers.

“It is not for the United States to be setting conditions or terms,” Kerry told a joint news conference with Turkish Foreign Minister Ahmet Davutoglu in Istanbul.

“To be back on track in its full measure, it is imperative that the compensation component of the agreement be fulfilled, that the ambassadors be returned, and that that full relationship is embraced,” Kerry said.

“I am confident that there will be goodwill on both sides.”

Israel apologized to Ankara on March 22 for the deaths of nine Turkish activists in a botched raid by Israeli commandos on a Gaza-bound aid ship, in a breakthrough engineered by U.S. President Barack Obama during a visit to Jerusalem.

The apology ended a nearly three-year rift between Israel and Turkey — two key U.S. allies in the region — and the two countries are due to begin talks on compensation on Friday.

But they have yet to exchange ambassadors and fully restore diplomatic ties.

Turkish Prime Minister Recep Tayyip Erdogan accepted the apology “in the name of the Turkish people” but said the country’s future relationship with Israel including the return of ambassadors would depend on the Jewish state.

The Israeli apology was cherished as a victory for Turkey in some quarters.

But Kerry noted: “The foreign minister expressed to me very clearly in response to any inquiry from me that they have taken steps to try to prevent any kind of triumphalism.”

For his part, Davutoglu praised the efforts by Obama and Kerry to help reconcile the two Washington allies.

“Now it will be important to make progress in fulfilling the conditions by taking rational and principled steps,” Davutoglu said.

“We have overcome the apology issue and now we’ll hold talks about compensation,” he added.

After talks in Turkey, Kerry heads later Sunday to Israel and Ramallah in the West Bank, where he will meet with Palestinian president Mahmud Abbas.

He will also meet with Israeli Prime Minister Benjamin Netanyahu on Monday, in what will be his third trip to the Middle East region since the start of his tenure on February 1.