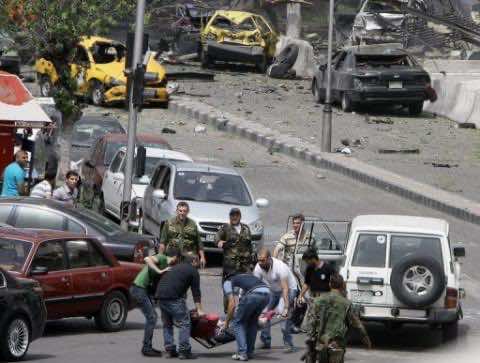 A powerful suicide car bomb ripped through part of central Damascus on Monday, Syrian state media reported, with medical officials saying at least 12 people had been killed and 45 wounded.

An AFP correspondent said the explosion caused extensive damage and intense gunfire could be heard shortly afterwards. The force of the blast blew out the windows of the AFP bureau in Damascus, but no staff were hurt.

State television broadcast scenes of devastation, with huge plumes of thick black smoke billowing up around buildings in the area, partially obscuring them from view.

Dozens of cars were damaged, some crumpled almost beyond recognition, others with their windows blown out or cracked by the blast.

Firefighters rushed to the area and were working to put out fires in cars set ablaze by the explosion, which one state broadcaster said took place near a school, adding children were believed to be among the dead and wounded.

The footage showed bloodied dead bodies with limbs askew and flesh gouged out strewn on the streets, with bystanders draping clothes or cardboard boxes over them.

One group of men worked to retrieve a body from inside a badly damaged yellow taxi, tugging at the jammed doors of the vehicle.

The explosion occurred near the Syrian central bank, and security forces and the army quickly moved into the area to prevent people from approaching the scene of the attack.

On March 21, a strong explosion ripped through a Damascus mosque killing at least 49 people, including a key pro-regime Sunni cleric.