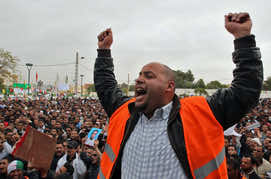 Algeria is making more gestures towards people in the south of the country, but that has yet to succeed in mollifying the anger spreading across the region.

On Thursday (April 4th), Labour Minister Tayeb Louh paid a visit to Tamanrasset. As he entered the city, unemployed young people were waiting for him with banners expressing their demands.

At the end of his trip, along the road leading out of the city, these same young people were waiting for him once again with their banners. Surrounded by security officers, the young people demanded jobs and complained about their exclusion.

Although several members of the local Co-ordinating Body for the Defence of Unemployed People’s Rights (CNDDC) attended the meeting with the minister, the decision to stage a big demonstration in Tamanrasset on April 10th has not been reversed.

“We were contacted by members of the government and the president’s office, but we refuse to engage in under-the-table dialogue,” said Taher Belabbes, the national co-ordinator for CNDDC. “We want frank and open dialogue with representatives of unemployed people. We want to be recognised as real representatives.”

“Our protest will not end. There will be a demonstration in Tamanrasset, followed by another in Ghardaia on 13 April,” Belabbes said.

The labour minister had a met with young people and local elected representatives at the end of the day in the provincial capital. Louh listened to the grievances of the young people of Tamanrasset and conveyed the government’s responses.

In addition to demanding public sector jobs, Tamanrasset youths are also seeking a quota for jobs at the In Salah gas complex and the Amesmessa gold mine.

The talk is becoming more radical and developing in a way which is troubling local elected representatives, the new governor and even the minister. Young people have railed against the central government and want more from it immediately.

One of the complaints they have levelled at companies is the fact that the latter exclude them by setting impossible requirements, such as knowledge of foreign languages for jobs as drivers, guards or cleaners. They have also hit out at huge pay differentials.

The new governor has already sent a specialist committee to In Salah to review the local job situation. The labour minister has also promised to crack down on companies which break the rules and has said that the Ministry of Trade could remove any company which does not obey the prime minister’s instructions with regard to employment in the south.

He also pointed out that only governors have the right to decide to recruit from outside the province in exceptional cases where no one within the province can be found to fill a vacancy.

“Problems are solved by being open. We have nothing to hide. It’s true that there are loopholes and irregularities, but we’re going to close the door to those who want to exploit these loopholes,” the labour minister said.

Louh also stated that only investment that creates wealth and jobs could solve the problem of unemployment. In this regard, he said that measures to encourage investors should be revised to offer more advantages to those who want to invest in the south than are offered to those who invest in the north.

Although Louh has repeatedly insisted that oil and gas fields and the public sector are not the only sources of jobs, and has pointed out that sectors such as agriculture and construction are in desperate need of labour, young people are keeping up the pressure on the government and demanding jobs immediately.

Local dignitaries have also spoken out. At the end of last month, they held a meeting to express their grievances, which include their rejection of the “exclusion” of the south. They are calling for a quota of jobs within top-level state institutions such as ministries and embassies and want Tamashek to be taught using Tifinagh, the traditional script of the Touareg.