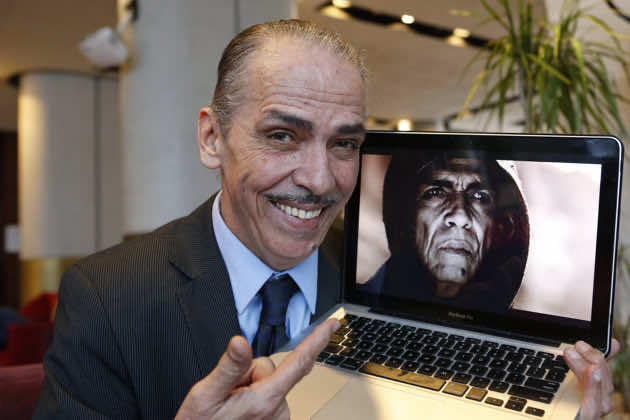 Mehdi Ouazzani isn’t the devil, but he has played one on TV — only he didn’t realize that some thought he looked like President Barack Obama while he was at it.

A veteran Moroccan actor with decades of film experience, Ouazzani was bemused to wake up one morning and find that his role in The History Channel’s popular five-part miniseries “The Bible” had become the latest way for conservative commentators in the United States to needle the president.

“One morning somebody called me and said ‘you have to look at your email’ and I was so surprised,” Ouazzani told The Associated Press in Casablanca before jetting off to the remote desert town of Erfoud, where he’s playing a police inspector in a German crime drama.

“For someone like me, a simple unknown actor, to find himself in a controversy like this — even though it’s nonsense — it makes me known around the world, so it’s something positive,” he said with a chuckle.

With gray hair pulled back in a ponytail, an expressive face and a slim Errol Flynn-style pencil mustache, Ouazzani doesn’t look a great deal like America’s 44th president — but then he doesn’t resemble a stereotypical Satan very much either.

It was only after an hour and a half of makeup and a heavy hooded robe in Morocco’s blazing desert that Ouazzani became the figure on a mountain top tempting Jesus.

It’s this new look that laid the stage for the Obama comparisons.

After the episode aired in mid-March, conservative firebrand commentator Glenn Beck tweeted to millions of his followers : “Does Satan look EXACTLY like Obama? Yes!” The cry was taken up by others and provoked a fierce response from Obama’s supporters that compelled the History Channel to announce it had “the highest respect” for Obama, and “it’s unfortunate that anyone made this false connection.”

Part of the resonance of the controversy was the sheer success of the miniseries, which had 13 million viewers for its first episode — beating out even “American Idol.” The final episode, featuring the passion of Christ, aired on Easter, March 31, and had 11.7 million viewers — competing handily with the season finale of cable favorite “The Walking Dead.”

Conservative television personalities Bill O’Reilly and Sean Hannity were still talking about it weeks later on their shows, with Hannity telling “The Bible” executive producer Roma Downey that he, too, thought the program’s Satan resembled Obama.

In a statement, Downey maintained that she and fellow producer and husband Mark Burnett “have nothing but respect and love our president, who is a fellow Christian,” adding that “false statements such as these are just designed as a foolish distraction to try and discredit the beauty of the story of the Bible.”

It’s not Ouazzani’s first tour through the pages of Christianity’s holy book. He appeared in the 2006 mini-series “Ten Commandments” and the 2000 production “In the Beginning,” as well as a string of other biblical productions in the 1990s.

Still, Ouazzani found playing Satan this time quite a challenge, as he tried to convey intensity with little more than his eyes, delivering the devil’s grim temptations to Jesus in sepulchral tones.

“I have a very expressive face, when African or Moroccan people talk, we talk with our faces,” he said, describing his scenes as the prince of darkness playing opposite Portuguese actor Diogo Morgado’s Jesus. “Satan taught me how to manage my close-ups, because Satan didn’t feel anything, didn’t suffer anything.”

Ouazzani’s face lights up as he talks about the filming, displaying little real-life resemblance to his gloomy character in the movie.

Ouazzani praised the producers and the professionalism on the set, which dealt with its own set of challenges, including Morocco’s ample desert serpent population.

“Before you go to the set, there was a special person who knows about serpents and scorpions and they go through and clean everything,” said Ouazzani, describing how one of the snake wranglers even caught one in the middle of production.

“He came into the middle of the set, he looked around and then went running and took up a snake from under the sand with his hand,” he said.

Ouzzani said working on a series like “The Bible” has been particularly enjoyable because it gives him a taste of the Hollywood system — something many Moroccan actors yearn to do.

“Hollywood is the only cinema where I really feel like an actor,” he said, “the rest feels do-it-yourself.”

While dozens of American productions have been shot in Morocco, including “Gladiator,” ”Kingdom of Heaven,” ”Blackhawk Down,” ”The Bourne Ultimatum” and most recently the TV series “Game of Thrones,” they feature comparatively few Moroccan actors.

Ouazzani ascribes being cast to luck and knowing the right people — but speaking French, Spanish, Italian, English and Arabic hasn’t hurt. He credits his time as a flight attendant for the national airline, Royal Air Maroc, with putting him in daily touch with people from all over the world.

He started acting in his 20s and has appeared on the Spanish stage, played a police inspector in French movies, and will play a terrorist leader in an upcoming Spanish film about the 2011 bombing of a tourist cafe in Marrakech.

And who knows, maybe a chance comment by a conservative commentator will open the gates to Hollywood.

“Some good has come out of this,” he said, adding with a twinkle in his eye: “Before, I knew who Obama was, and now he knows me, and if he has time I’d like to invite him and his family for couscous in Morocco.”