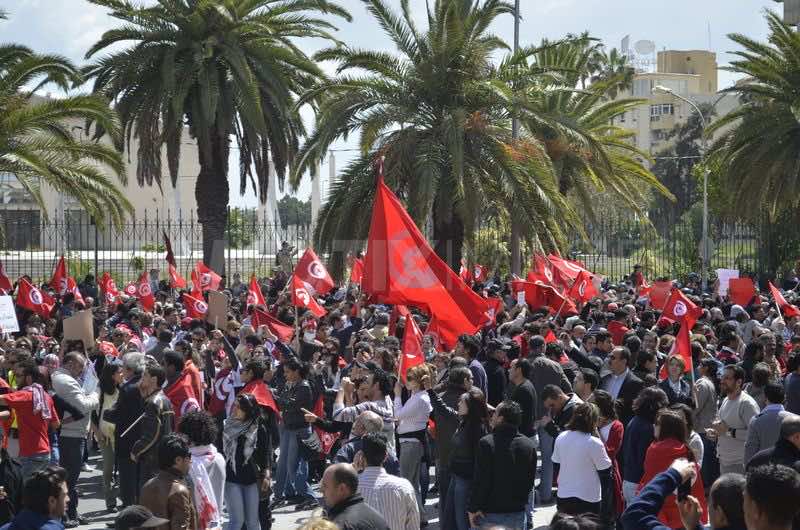 Tunisian Islamists and opposition activists demonstrated on Tuesday for Martyrs’ Day, marking a 1938 massacre of nationalists by French troops, as a strong police presence deterred any major incident.

Since the 2011 revolution that ousted long-time dictator Zine El Abidine Ben Ali, Martyr’s Day has also commemorated those killed in that struggle, and the event degenerated into violence last year.

Several hundred partisans of the ruling Islamist party Ennahda, along with ultra-conservative Salafist Muslims and members of the pro-regime League for the Protection of the Revolution gathered on Tuesday in central Habib Bourguiba Avenue, in front of the municipal theatre.

On the other side of the street, and separated from the first group by the police, centrist and left-wing activists gathered near the French embassy.

Separately, around 1,000 opposition activists headed for Bab Souika, which leads into Tunis’s Old City and was the site of a 1991 attack attributed to the then-outlawed Ennahda.

Demonstrators chanted: “We are going to die, but not without eradicating Ennahda.”

A police colonel had told AFP beforehand: “We fear the worst at Bab Souika. We have taken all the (necessary) security measures, but one never knows.”

But aside from some isolated incidents, quickly broken up by police, there were no major clashes and the demonstrations dispersed by 1330 GMT.

On Martyrs’ Day last year, around 20 people were hurt during a day of clashes in Habib Bourguiba Avenue between demonstrators and police, who fired tear gas to disperse them.

A commission was formed to investigate those incidents, but it has never published a report.