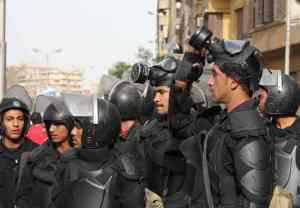 A Dutch journalist was briefly detained in Cairo after a group of Egyptians accused her of spying as she interviewed people, a colleague and a police official said on Tuesday.

Freelance journalist Rena Netjes was carrying out interviews for a report on youth unemployment on Monday when passers-by accused her of spying and handed her over to police, Dutch colleague Bas Altena told AFP.

Netjes was released on Tuesday afternoon after spending the night in jail, lawyer Ragia Omran said.

Dutch ambassador Gerard Steeghs wrote on his Twitter account that Netjes was freed after he had spoken with the state prosecutor.

“But she will have to update her Egyptian press card. I just picked her up,” he wrote on Twitter.

Bas Altena, her colleague, said over the telephone from Amsterdam that Netjes called him after her arrest and told him she had spent the night in jail and was taken to a court on Tuesday morning.

The Dutch radio station BNR which employs Netjes quoted her as saying she was interviewing a group of youths in a cafe when the owner asked to see her passport. He then accused her of inventing stories and called the police.

She said police found text messages on her phone, of the sort activists send to journalists, calling for President Mohamed Morsi’s overthrow, according to BNR’s website.

A police official told AFP that Netjes would face questioning on the text messages found on her mobile.

Some Egyptians view foreigners with suspicion. A television advertisement sponsored by a security service had warned Egyptians not to reveal information to foreigners who might be spies.