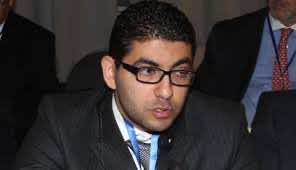 Morocco’s parliament speaker accused Israel on Tuesday of arrogance for having barred two Moroccan MPs in an EU-led parliamentary team from entering the West Bank to meet Palestinian officials.

Karim Ghellab, in a statement, condemned what he branded a “discriminatory and arrogant act” of the Jewish state.

On Monday, Israeli authorities barred the two MPs accompanying EU parliamentarians from crossing into the West Bank, said one of the lawmakers,  Mehdi Bensaid.

The MPs, whose country belongs to a PACE Middle East sub-committee, were part of the delegation of the Parliamentary Assembly of the Council of Europe.

Bensaid and Chekkaf instead staged a sit-in at the Allenby Bridge crossing between Jordan and the West Bank until the EU visit was due to end on Tuesday afternoon.

The other 16 members of the delegation of the Council of the sub-committee were allowed to cross, Bensaid said.

Morocco is one of the rare Arab countries to receive Israeli officials despite the absence of formal diplomatic relations. Egypt, Jordan and Mauritania are the only Arab states to have forged full diplomatic ties with the Jewish state.