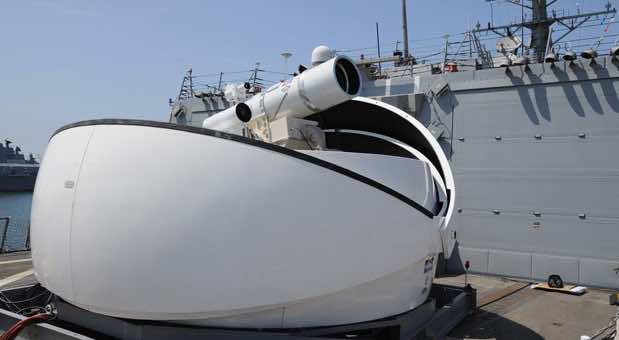 The U.S. Navy said Monday it is preparing to roll out a sea-based laser weapon capable of disabling small enemy vessels and shooting down surveillance drones.

The laser system will be deployed in 2014, two years ahead of schedule.

Chief of Naval Research Admiral Matthew Klunder said the cost of one blast of “directed energy” could be less than $1.

“Compare that to the hundreds of thousands of dollars it costs to fire a missile, and you can begin to see the merits of this capability,” he said in a US Navy statement.

“The solid-state laser is a big step forward to revolutionizing modern warfare with directed energy, just as gunpowder did in the era of knives and swords.”

This comes amid heightened tension between the United States and North Korea with Pyongyang threatening to fire nuclear missiles.

A top U.S. military commander said Tuesday he favored shooting down a North Korean missile only if it threatened the United States or Washington’s allies in the region.

When asked by lawmakers if he supported knocking out any missile fired by North Korea, Admiral Samuel Locklear, head of U.S. Pacific Command, said: “I would not recommend that.”

But the four-star admiral told the Senate Armed Services Committee he would “certainly recommend” intercepting an incoming North Korean missile “if it was in defense of our allies” or the United States.

Amid widespread speculation North Korea could be preparing a missile launch, Locklear also said he was confident the U.S. military would be able to detect quickly where any missile was headed.

“It doesn’t take long for us to determine where it’s going and where it’s going to land,” said Locklear, who oversees American forces in the Asia-Pacific region.
The laser which will be launched in 2014 runs on electricity, so the weapon “can be fired as long as there is power,” and is a lot safer than carrying explosives aboard ships.

The U.S. military has powerful radar in Japan at the moment to help track a possible missile launch as well as naval ships in the area equipped with anti-missile weaponry. Japan and South Korea also have their own missile defense systems.