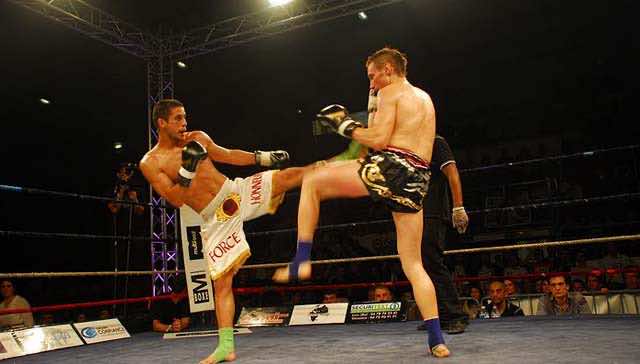 The Franco-Moroccan Abdellah Ezbiri won the world belt of the International Kickboxing Association (ISKA) after beating Swedish Kittisak Noiwibon at the 7th edition of Fightzone, played on Saturday April 6, 2013 in Lyon (France) for the less-than 65kg category.

The Franco-Moroccan fighter played the match in his city (Lyon) and before his public, which helped him to impose his style on the fight, confirm his superiority and win the match despite the power and experience of the Swedish opponent.

The Fight Zone, initiated by Fouad Ezbiri became in a short time a major event in fist-foot boxing in France. In the fifth edition of Fightzone 2011, Abdellah Ezbiri won the European Championship after winning his fight against the Italian champion Filippo Solheid by knockout.

The Franco-Moroccan kickboxing champion dedicated his title to Morocco and to Moroccans around the world. Abdellah EZBIRI is already planning for another world title in GLORY 8 which will be held on May 3 at the Ariake Coliseum in Tokyo, Japan.