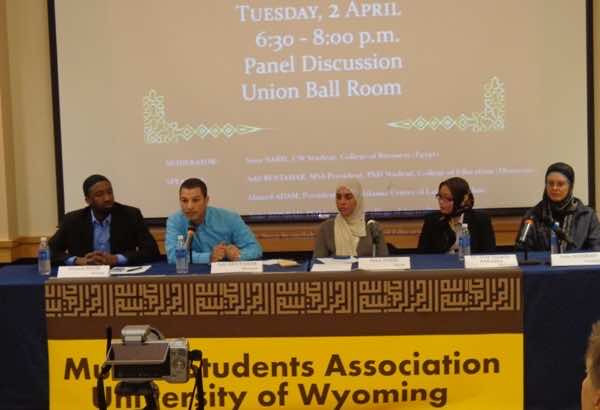 The University of Wyoming celebrated this year’s Islam Awareness Week with a fresh look. Islam Awareness Week, 1-6 April, 2013, is one of the most important events that the Muslim Students Association (M.S.A) at the University of Wyoming organizes yearly. This year’s week-long activities included cultural displays, henna tattoos, a panel discussion, and a movie titled Islam: Empire of Faith made Public Broadcasting Services (PBS).

A Middle Eastern tent was also set up at the heart of the university campus, where free Arabian coffee, tea, cookies were shared with community members (university students and faculty members in particular), as well as henna tattoos that were a major attraction for the Cowgirls specifically.

Saturday was scheduled for dinner and a presentation on the role and status of women in Islam, with over 300 people in attendance. The guest of honor, Dr. Jerald Dirks, a graduate of Harvard and former minister of the United Methodist Church, highlighted seven areas where women in Islam are valued. Women’s right to education, free speech, and inheritance were among the seven topics tackled in the presentation with meticulous citations from both the Coran and the Sunnah (Prophet Mohamad’s teachings). 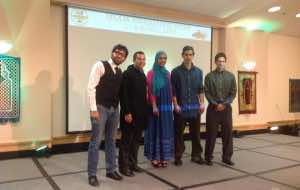 This year MSA gladly accepted the invitation made by Global and Area studies and ELS to join their event Arab-American Day held on Thursday. Ismail Elfallah, a graduate student from Libya in Communication and Journalism, and active MSA member, described the opportunity of enjoying American students’ plays, songs, and news reports as another extension of sharing cultural aspects of Arabs as part of the Muslim population. This time the performances which were all in Arabic, were from the lens of American students. Several non-Muslims attended the Jumuah prayer, which was held on-campus in English.

MSA President Adil Bentahar especially appreciated the interaction between the panelists and the audience on Tuesday. Anke, a PhD candidate from Germany, noted that along with other activities, the panel discussion “was a huge success with four representative Muslims sharing their experiences with over 70 people, who were almost all non-Muslims.”

Several members of the audience thought the opening remarks by MSA President (welcome speech) were moving and powerful. Moroccan graduate student Adil Bentahar couldn’t emphasize enough the marked contribution of Islam Awareness Week to promoting diversity and religious tolerance in his new community, Wyoming. “As a human being living on this earth I sincerely would rather see Western and Muslim students think critically, and before judging each other based on the media, movies, and politics, we need to stop for a while, think twice, and seriously consider other versions of the story” says Adil.

Mr.Bentahar also stressed how Islam encourages co-existence and acceptance of the other, saying “My call tonight to myself first, and to all people sharing this beautiful world, is to cherish and appreciate diversity in all its forms” [because] “there is nothing wrong with having a neighbor who thinks, believes, speaks, or dresses differently”. The opening remarks were a good reminder of the many similarities that mankind share. Commenting on the many misconceptions prevalent in Western societies, Adil said “My religious education and upbringing in Morocco, a predominantly Muslim country, have never instructed me to hate non-Muslims”.

MSA President referred to another important factor that nurtures those misconceptions in the following words “There is a big line and difference between what is cultural and what is Islamic”.  He went on to say that certain practices in the Muslim world, such as preventing daughters from going to schools and forced marriages are purely cultural, because Islam through the Coran and Prophet Muhammad’s teachings “highly encourage Muslims to get education and consent of both the bride and the groom are key to any marriage”.

Islam Awareness Week reflected Americans’ appreciation of cultural events of this kind to learn more about Islam, this time from Muslims. “I have attended several Islam Awareness Week events during my stay in the States, but this year’s remains the top and the best”, says Muhamad from Saudi Arabia, an undergraduate student in Petroleum engineering.

It should be noted that the Muslim Students Association at the University of Wyoming is planning several other events next fall. As MSA President, Mr. Bentahar expresses his gratitude to the university and community members for their constant support and to the MSA leaders for their commitment and devotion to the promotion of promoting diversity and better representation of Islam and Muslims.