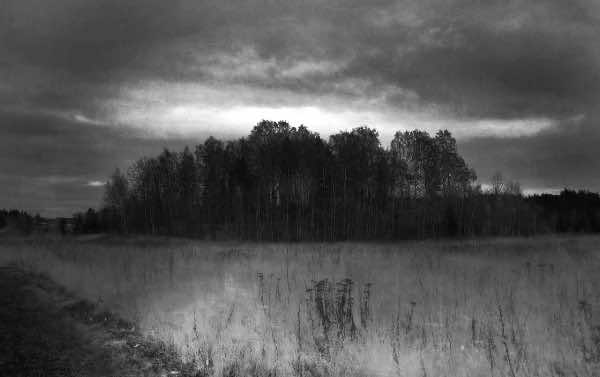 It was a winter day, specifically after the Ichaa prayer around 11 pm. The sky was as dark as a lunar eclipse and as cloudy and foggy as if it were going to rain heavily. Against that terrifying background, I was irrigating our fields. No other person was in the fields but myself because it was freezing, windy, and too late and perilous to be out. From time to time, I heard the howling of dogs, croaking of frogs, and wailing of wolves. The palpitation of my heart started escalating; I could hear the beats quite clearly. A myth believed by the people in our tiny village crossed my mind: if the moon was clear, a sepulchral mule “Tasrdunt n Isnddaln” might appear.

The sepulchral mule takes anyone it comes across to the graveyard and buries him before he dies. According to the tale, the mule is a woman who does not mourn and wears white clothes for four months and ten days when her husband dies. No sooner had I thought about that myth than my feet started shaking, and my teeth started vibrating. I was clever enough to be aware of the mule’s weak point so that I stayed in the shadow of trees most of the time, because if the mule comes into shadow, it would be transformed back to her normal self. All of a sudden, still thinking of how to keep myself safe, I heard loud thunder, saw what clearly appeared to be lightning, and was convinced that the sky would fall down that very night. As soon as I heard it, I leapt in place, and the fig tree under which I was sitting hit me on my head. I was bleeding, yet my fear made me oblivious to the pain.

I could no longer stay in the fields, and I ran as fast as I could in the direction of home. I left behind the hatchet and the boots on the road as they were too heavy with clay to carry with me. On the way, I ran across a huge person wearing a black jellaba, accompanied by a black dog. They made me even more scared. I kept running as fast as I could, and I turned around frequently to check if the figure was chasing me. He had not even paid any attention to me. He was busy talking and playing with his black dog. I arrived home with great difficulty, sighing and hardly catching my breath. I went straight to the living room where my mother usually sat. I did not find her there, something that was unusual to me, and I started calling for her loudly.

Eventually she responded to me—she had only been in the izghi, our traditional kitchen, preparing some soup for dinner. As soon as she caught sight of my face, she screamed and asked what the problem was. She hugged me tightly; she could easily see fright in my eyes. The ambience seemed to be as awful as if death had taken everything and decimated everyone within its sight.

We sat down by Al-messi, a traditional wooden oven, getting some warmth while the dinner was cooking. I leaned my head against my mother’s chest. She ran her fingers through my hair while telling me an old story as was her nature. She was not only trying to make me sleep, but soothe me to make me forget what happened to me in the fields. However, outside, it was still so windy, snowy, and we heard recurrent thunder. During that same night, something knocked at a window of our house, but my mother seemed not to hear anything, or she tried to be nonchalant in order not to make me more nervous.

She said “it’s okay, son, it was just the snow, and tomorrow, everything will be nice and white.”But the fact that she was whimpering and weeping as if someone had come to take me away from her, made me doubt her words.

She didn’t tell me anything meaningful. After a nice time sitting by the warmth and coziness of the Al-messi, with a lit candle in my mother’s hand, and the pot of soup in my hands, we moved to the living room and started our dinner. Out of the blue, while eating my dinner, I again heard strong knocking, and the soup in my mouth unconsciously spilled out. At the same time, one of the living room windows was pushed inside and the glass broke with a shatter.

Shocked, my mother said, “How strong the wind is tonight.” However, she knew that I noticed that something abnormal was happening. She did not tell me anything except that it was ok. She kept asking me, after each spoon of soup that went into my mouth, if I had finished eating so that I could sleep and forget that dark night. Neither of us finished our soup. Afterward, I tried to sleep, and pretended that I believed what my mother was saying, and that it was just a windy and snowy night like any other of its kind. But at that moment, something more serious, terrible and dreadful happened: I heard a loud voice and saw a glittering strong light.

I asked my mother what it was, but she had not heard anything or was just pretending as if she hadn’t. She said it was a hallucination I was experiencing. The voice repeated again and I could discern what it was saying. Whoever owned the voice was invisible. At the end, he said that he had been sent by a fairy queen to tell me a real story about something that would happen to me. He asked me “not to be afraid”, and said “peace be upon you”. My mother did not hear anything. By then, she   was fast asleep, and I did not tell her anything about that.

The voice then began its story, saying it had come to tell me about great father. I courageously answered I was all ears. Then he said, “The great father I want you to know about lives in and for the Seventh World that he created himself.”

“But, what is the Seventh World?” I asked. He did not answer me and continued on with his story.

“The Seventh World includes seven suns, seven moons and a flower. It contains few people who have an intimate and powerful relation to iron; with their weak hands, they can make it turn fragile. The great father also has a strange and unique relation to iron, but more than that, he is the one who takes heed of the suns, which turn into moons at nights.

I scarcely could believe was when he said, “the Great Father has just seven fingers that light and illuminate the Seventh World.”

“Hey kid, hey kid, have you slept, so I can come back someday. Good-bye, is the last thing I heard.