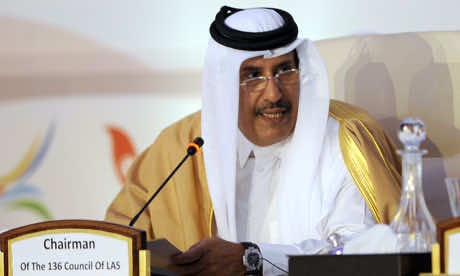 Energy-rich Qatar has agreed to buy bonds from cash-strapped Egypt worth $3 billion over and above a previously announced aid
package, its Prime Minister Sheikh Hamad bin Jassem Al-Thani said Wednesday.

The announcement comes as Cairo holds difficult talks with the International Monetary Fund over a loan of $4.8 billion as part of a financing programme to lift Egypt’s economy out of crisis.

“We have agreed to add Egypt government bonds worth $3 billion,” Sheikh Hamad said at a joint press conference in Doha with visiting Egyptian counterpart Hisham Qandil.

Qatar has already announced an aid package of $5 billion to Egypt, comprising an outright grant of $1 billion and $4 billion in bank deposits.

A delegation of the IMF is visiting Cairo for talks on the financing programme and is expected to examine Egypt’s efforts at economic reform.

The government has been walking a tightrope as the reforms required by the international lender are likely to spark social tensions.
The size of the loan may change, IMF officials have said, without elaborating.

Egypt’s authorities believe the loan will help restore investor confidence in the country, where unrest that accompanied the 2011 uprising that toppled former president Hosni Mubarak has caused a significant drop in revenue from the once-lucrative tourism industry.

Foreign reserves have plunged from $36 billion to some $13 billion in two years, and the budget deficit is increasing.

President Mohamed Morsi’s administration has been plagued by unrest and deadly clashes between protesters and police, blocking efforts to build broad-based support for a needed programme of economic reform.