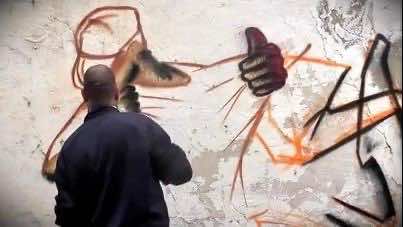 Two young Tunisians who sprayed slogans on a school building were cleared by a court on Wednesday of “harming public order” in a case seen by some as an attack on the right to freedom of expression.

Oussama Bouajila and Chahine Berriche, members of urban art collective Zwewla, sprayed “The poor are Tunisia’s living dead”, and “The people want rights for the poor” on a school building in the southern city of Gabes last year.

The pair had been on trial since December 4, charged with “spreading disinformation harmful to public order” and “harmful to the state of emergency”, which could have landed them with five years in prison.

However, on Wednesday a court in Gabes dismissed the public order charges and fined Bouajila and Berriche 100 dinars (50 euros or $65) instead.

“We are relieved, because it shows that the law did not follow the opinions of the political authorities,” Berriche told AFP after the verdict.

He said he hoped the public ministry would not appeal the decision.

The charges, brought after the pair broke a night-time curfew in Gabes to spray the slogans, provoked a backlash against the authorities.

Around 40 lawyers had argued for the dismissal of the public order charges, and dozens of sympathisers gathered in front of the court on Wednesday to denounce the trial as a “threat to freedom of expression”.

“It’s a political trial that brings to mind the methods Ben Ali used to shut people up,” Zwewla said previously.

The group, whose name means “the poor” in Arabic, had made itself known with its graffiti showing how little life has changed for the poor since Tunisia’s revolution, signed with a distinctive “Z”.

A committee set up to campaign for the release of Bouajila and Berriche hailed the ruling as “a symbolic victory,” and the FreeZwewla group on Facebook said it intended to hold a collection to pay the fine imposed by the court.

Members of Tunisia’s artistic community often complain of pressure from the police and accuse the government, dominated by the Islamist Ennahda party, of seeking curb civil liberties.