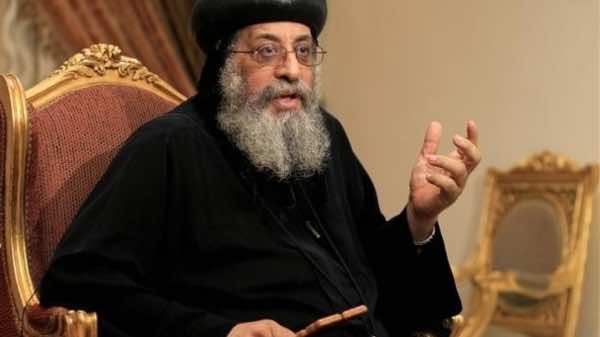 In Egypt, sectarian strife is brewing trouble at the top.

After a rare outburst from the Coptic Christian pope on Tuesday, a steady stream of daggers has been thrust at Egyptian President Mohammed Mursi, possibly paving the way for further confrontation.

Pope Tawadros warned that Egypt is collapsing under Mursi’s faltering rule, pointing blame at the Islamist president for failing to protect the church’s main cathedral after a mob attack on Sunday.

The attack left two Egyptians dead and at least 89 injured. It followed a funeral service for four Christians killed after sectarian clashes earlier in the week in a town north of Cairo.

“The church has been a national symbol for 2,000 years,” Tawadros said. “It has not been subjected to anything like this even during the darkest ages … There has been no positive and clear action from the state, but there is a God. The Church does not ask for anyone’s protection, only from God.”

The sectarian divide has repeatedly intermingled with the country’s lethal cocktail of political flux and societal disorder.

But despite years of Muslim-Christian anxieties in Egypt, the St. Mark’s Cathedral attack in central Cairo on Sunday was no exception, says Cairo-based author Ashraf Khalil.

Tensions between the Tawadros and the presidency arose when the pope publically voiced concerns over an Islamist-backed constitution in February.

He dismissed the new constitution as discriminatory and rounds of national dialogues sponsored by the president as meaningless. This was unusually vocal political activist stance since being enthroned in November.

After Sunday’s attack, while condemned by Mursi, Pope Tawadros was quick to note that the president had promised him in a telephone conversation to do everything to protect the cathedral, “but in reality he did not,” he said.

But what happened on Sunday night remains cloudy.

Local Egyptian media reported police firing tear gas over the cathedral walls, but there are also reports stating police “stood by” as unknown assailants armed with birdshot, knives and petrol bombs attacked those inside the cathedral’s grounds, the state-run Ahram newspaper reported.

Was this an example of Mursi not effectively mobilizing security forces to take strict damage control measures?

“There was a very small detachment of police forces that didn’t intervene until they got bigger enforcements,” explains Abdallah Schleifer, Professor Emeritus of Journalism at the American University in Cairo and a columnist at Al Arabiya English.

This shouldn’t have been the case, says Schleifer. “It’s obvious that feelings would be running high because of the fact that it’s a funeral service and yes, Mursi failed to provide adequate security.”

But the reaction from the presidency to Pope Tawadros’ attack on Mursi has been yet more finger-pointing.

Essam al-Haddad, the national security adviser to Mursi, claimed on Monday that Christian mourners started the feud when they exited the funeral ceremony and started destroying cars.

According to a Facebook statement from Haddad (found here), surveillance cameras showed people carrying Molotov cocktails and weapons around, inside and on top of the cathedral.

Police were prompted to interfere and use tear gas to disperse the crowd, Haddad added.

“The individuals seen to be firing firearms have been vehemently disavowed by the mourners. Investigations are still being conducted to reveal the identity of those involved in this incident,” said Haddad.

But his comments were seen as a cover-up by critics, among them Schleifer.

“He’s trying to defend the president from the criticism of the pope and he’s trying to cover-up for the lack of police that were there by blaming the Christian youth,” Schleifer says.

“In doing so, he’s inflaming and mobilizing the Muslim masses, as well as provoking hatred among Christian youth who have angry slogans against Muslims,” he added.

With an outspoken pope and a government unable to curb civil disobedience, that country’s sectarian polarization could soon amplify – on an institutional level.