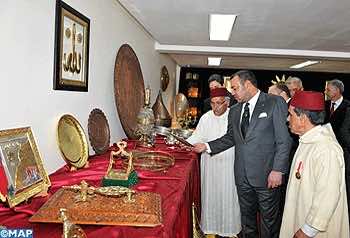 By inaugurating, Thursday, the Ain Nokbi handicraft complex in Fez, King Mohammed VI has given a strong impetus to the projects aimed at restructuring the handicraft sector and preserving the civilizational, authentic character of the city.

The new handicraft complex is meant in particular to resettle craftsmen of the Lalla Yeddouna square in the ancient medina. It also aims to protect the Sebbou river against polluting discharges of handicraft activities, upgrade and restructure copperware and tanning professions, improve the quality of craft products, increase investment and promote employment.

The 332.53 million dirham project, 139.82 million dirhams of which contributed by the Millennium Challenge Corporation (MCC), is expect to generate more than 6,650 jobs.

The complex includes 235 copperware production units, three foundouks with 272 workshops dedicated to subcontractor craftsmen, including 78 workshops for craftsmen of the Lalla Yeddouna square beneficiaries of the relocation.

As part of the project, a market for raw leather and hides and a traditional tannery were built.

HM the King handed over workshops keys to the beneficiaries of the resettlement programme and visited an exhibition of handicraft products.

In addition to the handicrafts sector, the royal solicitude for the medina of Fez has also materialized through the restoration of several historic sites and monuments, including Chemmayine, Sbitriyine, Staouniyine and El Barka fondouks, considered as landmarks in the history of Morocco and the city.

The rehabilitation of these four foundouks required a total investment of about 83.94 million dirhams, 77.62 million dirhams of which funded by the MCC. The project will benefit more than 1,250 people.

The preservation of the historical and cultural heritage of the medina of Fez is also the objective of the development and rehabilitation of Lalla Yeddouna square, implemented for 281 million dirhams.