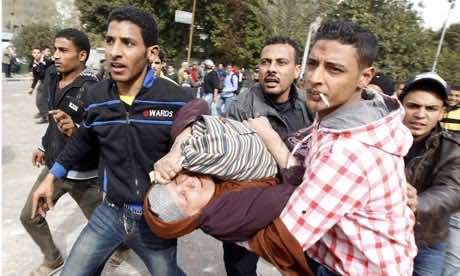 The Egyptian military ordered senior doctors to operate without anaesthetic on protesters injured during demonstrations against military rule, according to extracts of a leaked report published in the Guardian newspaper on Friday.

The report into military and police malpractice since 2011, commissioned by President Mohamed Morsi, also found evidence that medical staff and soldiers attacked demonstrators inside the same Cairo hospital, the British newspaper reported.

Earlier leaks of the report accused the military of torture and forced disappearances during the uprising against the rule of long-time leader Hosni Mubarak in 2011.

The latest chapter deals with the treatment of protesters at the Kobri el-Qoba military hospital in Cairo in May 2012.

According to the Guardian, the investigation was told that a senior military doctor told doctors to operate without anaesthetic or sterilization.

Another witness described how military doctors, soldiers and medics “assaulted protesters by severely beating them and verbally assaulting them”.

“I can’t overestimate the importance of this report,” Heba Morayef, the director of Human Rights Watch in Egypt, told the newspaper.

“The army always said they took the side of protesters and never fired a bullet against them. This report is the first time that there has been any official condemnation of the military’s responsibility for torture, killing, or disappearances,” he added.

Egypt’s president promoted military commanders on Thursday in show of support for the army amid rumors of tensions between the Islamist leader and the once ruling generals.