By Yasmin Najjar in Tunis and Mouna Sadek in Algiers 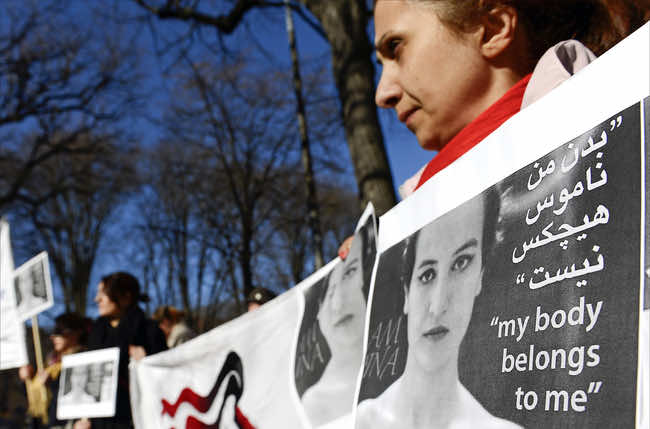 By Yasmin Najjar in Tunis and Mouna Sadek in Algiers

Femen activists on Thursday (April 4th) carried out a “topless jihad” in front of Tunisian embassies, mosques and Islamic associations in Europe to show their support for Tunisian activist Amina.

Tunisian activist Amina received much criticism after her topless pictures were posted on Facebook with the inscription “My body belongs to me”.

The group is supporting her against Islamists, whom the organisation considers to be a real threat to women’s gains and a danger to their rights.

According to the group’s Facebook page, French police arrested 15 activists of the organisation, including Meriem, a Tunisian Femen activist, who burned the “banner of monotheism”.

“I think this organisation makes matters worse, since it feeds ideological and religious prejudices in Tunisia at a time when we need more voices of reason,” Tunisian citizen Mustafa al-Dallaji said.

“The problem of Tunisian women is not to expose their chests, but to become an actual partner of men in all decision making including political decisions,” he added.

Mondher Toujeni said that nudity in this way was against tradition and that Islam called for women to cover their bodies.

“I am for liberating Amina but against the infringement on the sanctities of Muslims and provocations such as burning the banner of monotheism,” Tunisian Nahla Bou Laaba said.

“I personally consider going naked or wearing the niqab part of personal freedom and anyone has the right to wear what he or she wants, but the infringement and provocation of the feelings of others is vile,” Mouna Sfar said.

The attention that Femen and Amina have received resulted in the creation of an Algerian branch of the women’s rights group.

Some did not hesitate to support the movement, commending the courage of these women.

“No one should have the power of life and death over us. I support Amina and all Arab women,” Algerian student Zak Ostmane said.

He added that Tunisian Femen members were targeted by a “hate campaign orchestrated by Islamist circles”.

“Showing a bare chest to advance the cause of oppressed women, victims of injustice and sexism is a form of protest and not prostitution or pornography,” he said.

Others were sceptical about the reception that would be given to this new kind of feminist activism.

“Of course this offers a little fame, a visa to Europe, maybe even a prize from some humanist foundation… but it will certainly not make machismo and misogyny disappear from Algeria and Tunisia and elsewhere in the Muslim world,” he said.

For his part, “the struggle for women’s equality is to fight for the repeal of the Family Code and to shout loudly and clearly our opposition to polygamy. Equal access to employment must become constitutional and criminalise domestic violence must be criminalised.”

“There is also the need to end the shameful practice of repudiation and of women being thrown out of their homes simply because men wish it,” he added.

“Fundamentalists will find this to be good material to fulminate and make threats. The imams will find in it an opportunity to issue backward fatwas while the silent majority, who tomorrow could finally understand why equality between men and women is so vital, will wonder if this is really serious,” he said.